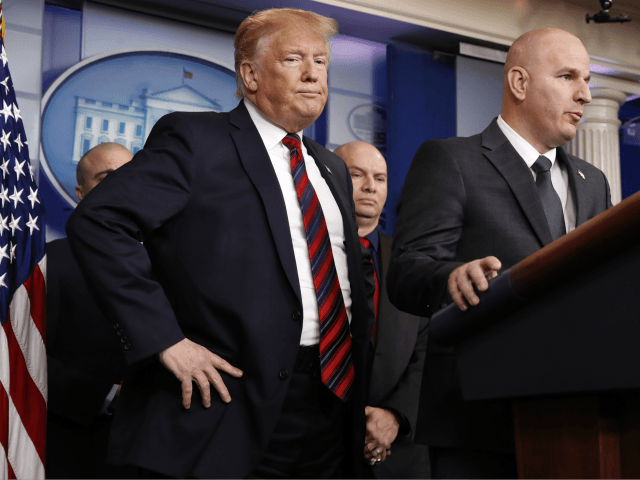 President Donald Trump “will prevail” in “securing the border” if he “declares a state of emergency,” Brandon Judd, president of the National Border Patrol Council, told Breitbart News on Wednesday.

He was offering his remarks on SiriusXM’s Breitbart News Tonight with hosts Rebecca Mansour and Joel Pollak.

Mansour asked Judd what Trump will be doing during his Thursday-scheduled visit to the U.S.-Mexico border.

Judd continued, “This is something that we greatly appreciate because he’s one of the only presidents that has actually ever gone out and toured the actual border while he’s in office, and it’s just great that he’s here. He wants to see and get a bird’s eye view of exactly what’s going on. This is actually his second visit to the border while in office. You can see that he’s really concerned about what’s going on and he’s getting good advice. Thank goodness.”

Judd replied, “She has absolutely no evidence, whatsoever, of any wrongdoing. There was no wrongdoing. It’s stuff like this that really ticks me off, and the reason it makes me so mad is because they’re glamorizing lawbreakers and they’re vilifying the good guys. They’re vilifying our law enforcement agents. That’s fundamentally wrong and literally leads to anarchy. Does she not want us to have police in the United States? It gets my blood boiling. She’s dead wrong in what she said.”

Judd recalled how border agents, during the Obama administration, spent their own money to provide diapers, formula, toys, and other basic necessities to children in their custody.

Judd stated, “I go back to the Obama era in 2014 when he had that unaccompanied minor crisis. It was our agents that were bringing in food, toys, diapers. It was our agents doing that with their own money. The government wasn’t even giving us the resources to take care of those children, and so our agents on their own were doing it. That’s what President Trump is trying to do. He’s trying to give us those resources so that he can take care of them, the same resources the Obama administration refused to give us.”

Mansour asked, “Democrats are using you — federal employees like you — as their bargaining chip and talking point. They’re saying, ‘These poor federal employees, they need their paychecks,’ and President Trump is responding, ‘They’re on my side in this. They understand the need for this.’ Explain to us how you feel about this government shut down because you guys have to work and you’re not getting your paychecks now because of this partial shut down. How long do you think the president should go in this fight?”

Judd speculated, “I ultimately think that he’s going to declare a state of emergency. He would be right in doing so. I think that he will secure his funding through the state of emergency. I do not think that the Democrats are going to give in at all. I don’t think it’s going to happen. That’s one of the things about this president. What he does is he thinks outside the box. He doesn’t just stick with one option. He looks at option A, option B, option C, and that’s exactly what he’s doing in this case. He’s trying to work with Congress first. If he can’t work with Congress, then he can declare the state of emergency, get the funding that he needs, and get the pieces of the puzzle together so that we can actually make it one picture and actually secure the border.”