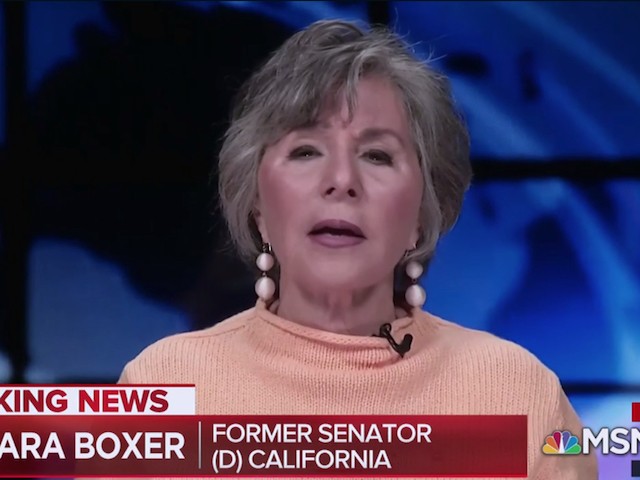 Friday on MSNBC’s “All In,” former Sen. Barbara Boxer (D-CA) questioned what the Montana rally audience was thinking by applauding President Donald Trump’s compliment of Rep. Greg Gianforte (R-MT) for assaulting a reporter last May.

Boxer said, “It’s another horrifying moment. But, you know, I don’t—I can’t blame the president for everything. These are people there that are applauding this. What are they thinking? What is the message to our children? I’m a grandmother. I wonder what’s going, sinking into those minds. I have an 11-year-old and a couple of 9-year-olds now, and an adult one at 23. I wonder what’s sinking into their minds.”

She continued, “He’s gone after the press in ways, again, that belie the very basis of our nation, which is freedom of speech, freedom of the press. The press makes every elected official crazy. I can tell you that right now. But that’s their job since Watergate. You’ve got to be expecting that that’s going to happen.”

She added, “Another point I’d make is the president often talks about Abraham Lincoln, one of the few presidents he thinks is better than he, maybe. But President Lincoln said he wanted to appeal to the better angels of our nature. And what this man does is he goes out and brings out the worst in people. Yes, the people go along with it, which is—that’s a whole other topic. But the fact is, he’s supposed to lead us, lead us in a way that makes us proud, and he does the opposite.”