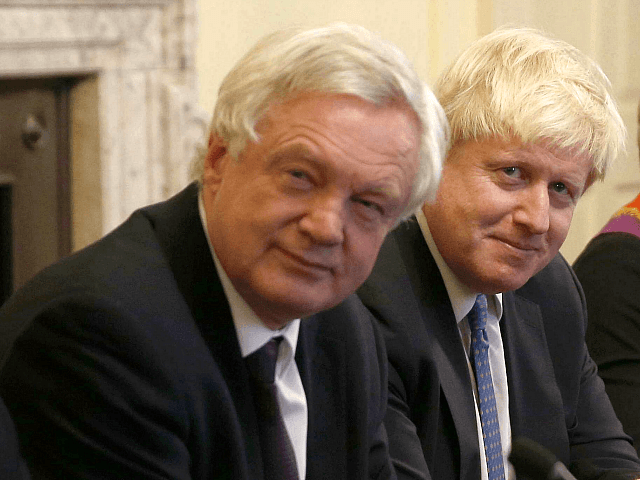 Boris Johnson, David Davis, and Jacob Rees-Mogg have penned a joint letter to Theresa May warning her that the public “will not forgive” the Tory Party if it sticks to her Chequers plan for Brexit.

The letter, which warns the Prime Minister “not to engage in a show of resistance and a choreographed argument [with the European Union] followed by surrender and collapse into some version of the backstop and Chequers“, may mark an explosive new escalation in the Brexiteer insurgency against her, with potential leadership challengers Johnson and Davis having previously collaborated little since their dramatic resignations from Cabinet over the course of the EU negotiations.

EU Talks Break Down, Ministers Told to Have ‘No Deal’ Brexit Preparations Ready in Weeks https://t.co/YXbNzYQZHt

The Prime Minister, who campaigned to Remain in the European Union during Britain’s referendum on EU membership in 2016, has already made a series of sweeping concessions to Brussels. This included a multi-billion pound exit fee and the adoption of a “common” rulebook on the regulation of goods and agri-products written and interpreted by the EU. But the UK has been offered virtually nothing in return — with the bloc not even willing to allow Britain to participate in the Galileo satellite programme which it helped develop and pay for.

So far, however, it has seemed no concession has been enough to appease the bloc’s negotiators, led by Frenchman Michel Barnier, with negotiations currently stalled over the question of the so-called ‘backstop’ — a proposal to keep the whole United Kingdom in the EU’s Customs Union in order to maintain a customs-free border between Northern Ireland and the Republic of Ireland — and the EU’s desire to have a backstop to the backstop — i.e. a guarantee that Northern Ireland can be kept in the EU’s regulatory ambit by itself if a UK-wide mechanism breaks down.

The former would render the United Kingdom effectively unable to take back control of its international trade policy and sign new deals with global economies such as the United States, Australia, and New Zealand, while the latter would leave Northern Ireland effectively annexed to the EU in economic terms and undermine its relationship with Great Britain in a way the Province’s pro-UK majority deem unacceptable.

“We were all elected on a manifesto to gain full independence by leaving the Customs Union and Single Market. It is crucial that we deliver on these promises,” the Brexiteers remind the Prime Minister in their letter.

“We urge you to make clear that you will not bind the UK into the purgatory of perpetual membership of the EU’s customs union, whether by a backstop or any other route… Talk of either a UK or a Northern Irish backstop is inimical to our status as a sovereign nation-state. Both are unnecessary: indeed they are a trap being set by the EU which it is vital we do not fall into,” they add.

Emphasising the fact that there is no parliamentary majority in favour of her proposals in Parliament, the insurgent eurosceptics urge Mrs May to hit the “reset” button on the negotiations and tell the EU that Britain will agree to a Canada-style trade deal, and keep the Irish border open by adopting various already-established technical solutions.

“We are close to the moment of truth. Brexit offers the prize of a better future, global free trade deals, and political independence,” they conclude.

“But if these potential gains are sacrificed because of EU bullying and the Government’s desperation to secure a deal, the British people will not forgive us.”