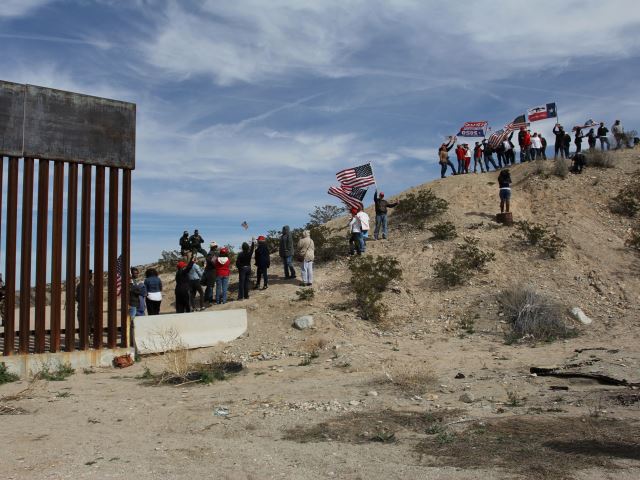 A group of border-security advocates traveled to an unsecured section of the New Mexico border with Mexico after President Donald Trump tweeted that he would “build a Human Wall if necessary.”

President Trump tweeted a message last week about the thousands of caravan migrants who continue to travel to the U.S. to exploit existing laws and request asylum.

Tremendous numbers of people are coming up through Mexico in the hopes of flooding our Southern Border. We have sent additional military. We will build a Human Wall if necessary. If we had a real Wall, this would be a non-event!

A few days later, a group of flag-waving border-security advocated put the pledge into motion when they traveled to partially-secured border in Sunland Park, New Mexico to demonstrate a “human wall” in action, Fox News reported. The advocates brought signs and American flags as they stood in an area where the existing border fencing simply stops. The area is regularly exploited by migrants who are crossing into southern New Mexico by the thousands.

The New Mexico border with Mexico falls under the El Paso Border Patrol Sector. A report released last week by U.S. Customs and Border Protection officials reveals that El Paso Sector Border Patrol agents apprehended more than 9,000 migrants in January after they illegally crossed the border between ports of entry. In the first four months of this fiscal year, agents witnessed a 1,588 percent increase in the number of migrant families apprehended and a 249 percent increase in the number of unaccompanied minors who cross in the desolate border region.

In response to the continuing migrant crisis along the country’s southwest border, President Trump ordered nearly 4,000 additional U.S. troops to the border region, Breitbart News reported. A DOD spokesperson stated that the 3,750 deployed troops are all active duty military personnel. They will suppliment the 2,250 members of the National Guard who are currently under deployment orders. The deployment is expected to last 90 days, officials stated.

The president also moved 250 active duty military members to Texas in response to the arrival of 2,000 caravan migrants. DOD spokesman, Navy Captain Bill Speaks, told Breitbart News that the deployment consists of “military police, medical personnel, and engineers who will support hardening of these (ports of entry).”

During the State of the Union Address on Tuesday, President Trump chided lawmakers for the “cruel” tolerance for illegal immigration.

“Now is the time for Congress to show the world that America is committed to ending illegal immigration and putting the ruthless coyotes, cartels, drug dealers, and human traffickers out of business,” the president stated. “This is a moral issue. The lawless state of our Southern Border is a threat to the safety, security and financial well-being of all Americans.”

“Tolerance for illegal immigration is not compassionate — it is cruel,” the president stated.