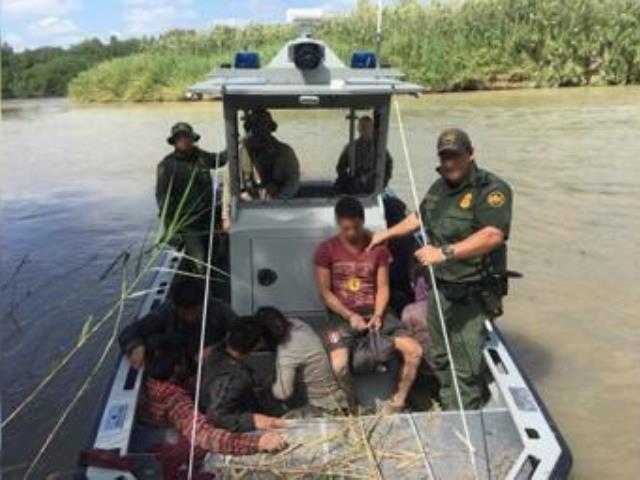 Border Patrol agents in the Rio Grande Valley Sector rescued five migrants from the possibility of death at the hands of cartel-connected human smugglers. Four of the rescues occurred in the Rio Grande while the fifth was on a ranch 80 miles from the border.

McAllen Border Patrol Station agents patrolling near Mission, Texas, on May 26 observed a group of migrants attempting to cross the Rio Grande back into Mexico to avoid apprehension. One of the men and two women began having difficulty staying afloat in the swiftly moving currents of the river that separates Texas and Mexico, according to information provided by Rio Grande Valley Sector Border Patrol officials.

A McAllen Station riverine unit arrived on the scene and extracted the distressed migrants from possibly drowning in the river. The riverine agents transferred custody of the migrants to land-based agents. Those agents transported the migrants to a processing center after determining they required no immediate medical attention.

One day earlier, McAllen Station agents patrolling near Penitas, Texas, received a report about a group of migrants walking north from the Rio Grande after they had illegally entered the U.S., officials stated. The agents arrived on the scene and took three of the migrants into custody while five others fled back into the river in an attempt to avoid apprehension.

The agents observed one of the men having difficulty swimming and staying afloat, officials stated. Another riverine unit assigned to the McAllen Station arrived on the scene and pulled the man out of the water. The riverine agents transported the migrant to the safety of the awaiting land-based agents who transported him to the station.

All arrested migrants undergo a medical screening and biometric background investigation. The agents identified the man as a Mexican national. He will be processed for an immigration violation and will likely be returned to Mexico.

A fifth rescue occurred on May 22 in Brooks County, Texas, located 80 miles north of the border with Mexico. Border Patrol agents assigned to the Falfurrias Station received a call reporting a lost migrant on the vast ranchlands found in this country. This is an area known for human smuggling as migrants are force marched around the Border Patrol checkpoint located on U.S. Highway 281 in the middle of the county.

Falfurrias Station agents responded to the call and carried out an exhaustive, but unsuccessful, search for the missing migrant. The following morning Border Patrol Search, Trauma, and Rescue agents took over the search. Family members provided additional information to the agents who later located the man who was now in need of serious medical attention.

The agents arranged transportation by ambulance for the migrants. The ambulance crew transported the migrant to a local hospital for evaluation and treatment.

All of the rescued migrants will be processed under RGV Sector guidelines.