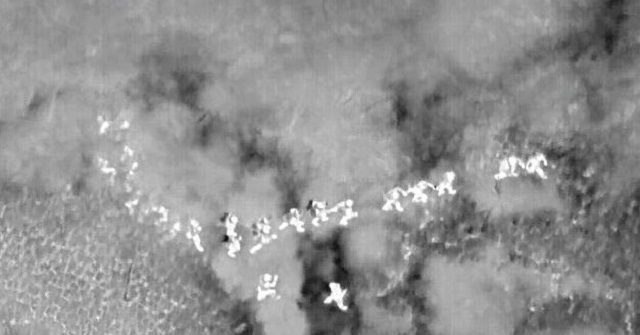 Border Patrol agents in Texas continue to arrest migrants attempting to avoid apprehension with the use of aerial video technology, whom would otherwise be classified as “got-aways.”

Laredo Sector Carl E. Landrum tweeted an image showing what Border Patrol agents see when Small Unmanned Aircraft Systems (sUAS) cameras pick up a group of migrants moving through the brush. In this incident, the agents were led to the location of 24 migrants attempting to avoid arrest.

As #USBP continues to expand its use of border technology, smugglers are discovering that it is becoming harder to hide under the cover of darkness. pic.twitter.com/1GSja0Jies

The sUAS operators guided the agents to the migrants who placed them under arrest.

“As USBP continues to expand its use of border technology, smugglers are discovering that it is becoming harder to hide under the cover of darkness,” Chief Landrum said in the tweet.

Further west, agents in the remote Big Bend Sector utilize night vision technology to find groups of migrants wearing dark and camouflaged clothing to attempt to hide in the brush.

MULTIPLE GROUPS APPREHENDED; ALL AGREED THAT THEY ONLY WATCH THE SUPERBOWL FOR THE COMMERCIALS:
Jokes aside, Marfa, Van Horn and Sanderson #BorderPatrol Agents, with assistance from @TxDPS caught multiple groups Sun/Mon.Some tried to run, but all were caught. Great job everyone! pic.twitter.com/y89wutMDEo

Agents assigned to the Van Horn Border Patrol Station, apprehend multiple groups of Undocumented Non-citizens. Most of the subjects were wearing camouflage clothing and attempting to conceal themselves in the brush near Van Horn, Texas. #USBP pic.twitter.com/O2zh7TJWFn