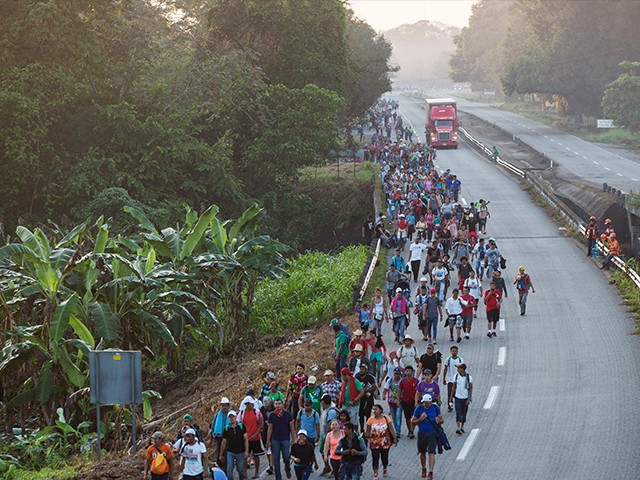 Brandon Judd, President of the National Border Patrol Council, told Breitbart News Tonight on SiriusXM that only a border wall and changes to existing asylum laws can stop the status quo of endless migrant caravans coming across the U.S.-Mexico border; and if laws are not changed, then more facilities are needed to detain asylum seekers while their claims are adjudicated.

In a Thursday interview with SiriusXM hosts Rebecca Mansour and Joel Pollak, Judd commented on President Donald Trump’s intention to use the military to block the Central American migrant caravan from crossing into the United States from Mexico.

Judd said Secretary of Defense James Mattis’s plan to deploy 800 active-duty U.S. troops to assist in border security efforts is worthwhile but not enough in the long-term to solve the issue of the migrant caravans.

“It’s going to help, but not for the reason that people think,” said Judd. “It’s going to free up our resources to be able to ensure that the cartels do not create a profit the way they did on the last caravan.”

Judd explained the exploitation of existing asylum laws by the migrant caravans.

“The fact of the matter is, if somebody puts one foot into the United States, I have to take them into custody,” said Judd. “And if they say, ‘I want asylum,’ then it kicks off the asylum process, and ultimately they’re going to be released [into America]. Now, they don’t have to be released. There’s nothing under law that says we have to release them, but we don’t have the holding facilities to hold the number of people that are going to cross the border illegally.”

Judd said American sovereignty will continue being challenged by migrant caravans if the status quo of catch-and-release laws and policies continues.

Judd said, “If you look at the last caravan, what they did is [play] a high stakes game of poker with the United States government back in April, that first highly publicized caravan. They said, ‘We’re coming. Stop us. We don’t believe you have the political will to do it.’ They crossed the border illegally, we ended up releasing them, and because of that we now have a caravan that’s three or four times the size of the original caravan, and if they get away with it, we’re going to see another caravan that’s going to be just as big or bigger. That’s the problem that we face today.”

Judd added, “We can only hold children for 20 days. That’s all we can hold them for. So if we don’t separate parents from children, then we have to let the parents go, as well. … What we know is if they think they’re going to be held and they think they’re going to be ultimately deported, they’re not going to come, they’re not going to risk it … but because we do not hold them, that is the magnet that is driving these people to come here.”

Judd said 98 percent of aliens given a court date neglect to appear.

Judd advised, “We have to have the political will — and this isn’t President Trump, this isn’t a President Trump issue, because he’s got the political will, he’s shown that — but what we have to have is Congress getting behind him and stepping up and mettling up, and also the agency has to get behind him and step up and mettle up, and if we do that, we can put an end to this disaster and insanity.”

A border wall would be “extremely effective” in reducing illegal crossings across the southern border, said Judd.

“[A wall] would help immensely because you have to be able to put your foot into the United States for me to take you into custody,” Judd explained. “If you can’t get over that wall, and I can make sure that wall is built to where you can’t get over it — remember, those prototypes down in San Diego, we had United States Special Forces try to get over the wall, drill through the wall, dig under the wall. There were certain prototypes they couldn’t defeat. If we did have that wall, then they can’t put their foot in the United States illegally and then it doesn’t kick off the asylum process. A wall would be extremely effective.”

Mansour asked, “Do you think [Donald Trump] should basically just shut down anybody coming into the country across the southern border? Do you think that would be a solution?”

Judd replied, “It wouldn’t, and the reason is because, let’s just assume that we’ve got enough border patrol agents and military to hold hands across the 2,000 miles of southwest border, let’s just assume that we have that. Even if [Donald Trump] declared a state of emergency, he cannot get rid of the laws that are already on the books. He can’t sign an executive order that is contrary to current law.”

Judd went on, “So even if we’re holding hands across the border, once somebody steps foot into the United States and claims asylum, I now have to take them into custody, period. That’s why physical barriers such as walls that are undefeatable … are so important.”

Judd added, “There were no specific laws that said you can’t stop somebody before they get to the country, but there are specific laws that allow people to claim asylum, and an executive order cannot conflict with the current laws. And because people have the right — and I know this is going to sound insane to your listeners, and it should — but because the people, even though they’re not United States citizens, because they have the right to claim asylum, we then have to put them through the asylum process, and an executive order cannot stop that.”

Brandon Judd of the National Border Patrol Council is right when he says on @foxandfriends that the Democrat inspired laws make it tough for us to stop people at the Border. MUST BE CHANDED, but I am bringing out the military for this National Emergency. They will be stopped!

Judd continued, “Let’s be clear, though. He can put an executive order in today that ends asylum, and we would have to abide by that pending the challenges in the courts, but there’s no way the courts are going to uphold it, but it would be very effective in the interim until the courts strike the executive order down.”

Mansour remarked, “So essentially, at the end of the day, as Trump has been saying all along, the laws need to be changed. This asylum thing has to be changed, and it has to be by Congress. It’s the only way; otherwise this ridiculousness is going to happen again and again and again, and our country is being taken advantage of, really, because of the generosity of our asylum laws.”

Judd recommended the construction of state-run facilities to detain migrants pending the adjudication of their asylum claims or deportation hearings.

Judd concluded, “So there are two ways to do it: law change or build the proper facilities, and comply with the Flores decision and put them in those state-run facilities.”