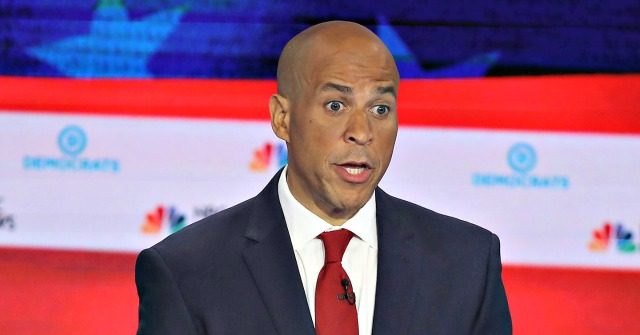 Tuesday on MSNBC’s “The Rachel Maddow Show,” Sen. Cory Booker (D-NJ) dismissed the idea that the 2020 presidential election would be a “referendum” on President Donald Trump’s handling of this current round of nationwide protests linked to the death of George Floyd while in the custody of Minneapolis police.

Booker argued the election was “much bigger” than presumptive Democratic nominee Joe Biden and Trump.

The New Jersey Democrat also likened the tactics used to clear protesters out of Lafayette Square near the White House on Monday to those of former Democratic Alabama Gov. George Wallace and 1960-era City of Birmingham, AL official Bull Connor.

“Well, look, I want to say first of all I love Joe, and I’m going to do everything I can,” he said. “But this is so much bigger than Joe Biden, and it’s so much bigger than Donald Trump. And I don’t think this is a referendum on him, on Donald Trump. I think this election is a referendum on us and who we are as a society. This is a moral moment. And there have been ones that have been — and I get schooled by my elders all the time. There have been moral moments like this before, where we face down people that wanted to do things so despicable. Bull Connor, I — George Wallace, I could go through people that used eerily similar tactics that he used in a park yesterday to dispel protesters. So, we answer those moral moments. We rose to those moments of challenge in our country. We haven’t finished yet. The arc has not fully been completed.”

“But we are — we spring from — my very existence in this body springs from our ancestors who met the darkness with their light, who met the most seemingly impossible odds with moral imagination that was extraordinary and ignited the engagement of others,” Booker continued. “And so, that’s where we are. This is a referendum on us. Will we — will we surrender to him and his tactics? Will we throw up our hands, or will we buckle down and double down and bring the best of who we are, that powerful alchemy that somehow turns concrete and stubborn, sclerotic, unmovable challenges into progress for our nation? That’s what we need, that kind of spiritual alchemy, that kind of creative love, that kind of unremitting action.”