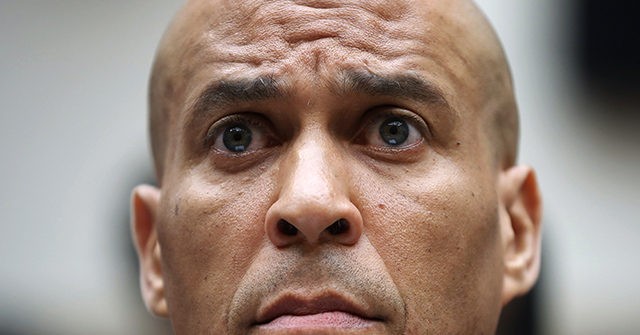 In a video shared to Twitter this afternoon, Booker is shown holding up a child and hugging him as he arrived with him in El Paso.

The senator spent 4+ hours speaking w/ the asylum seekers at the Organización Internacional Para Las Migraciones (OIM) in Juárez prior to the border crossing. The action comes following the campaign’s statement to end the border crisis. https://t.co/t3nqwTyyA5 pic.twitter.com/t0AllW6d8B

“I’m going to fight for these five folks and do everything I can to see that they get fairly evaluated,” Booker said after he arrived in El Paso. “This is a long process that they’re now engaged in and I’m gonna make sure my office does the right thing…”

“…I’m gonna fight for these five folks and do everything I can to see that they get fairly evaluated. This is a long process that they’re now engaged in and I’m gonna make sure my office does the right thing…” @SenBooker upon arriving across the border pic.twitter.com/PuFbu7p18d

When speaking to reporters, Booker also took aim at President Donald Trump and claimed he was to blame for the “horrible things” that are taking place at the border.

“It’s given me a greater conviction, a greater sense of determination, to fix this broken system and to correct the horrible things that Donald Trump is doing from the executive office,” Booker said. “I believe that the next president can transform this system to make it safer and stronger as a nation…”

“This is an issue where we should be doing things so dramatically differently, it could affirm our safety and security as well as our values,” Booker added.

Booker’s visit to Mexico comes just days after 2020 Democrat presidential hopeful Robert Francis “Beto” O’Rourke traveled to the country to visit with migrants not admitted to the U.S. at the southern border.