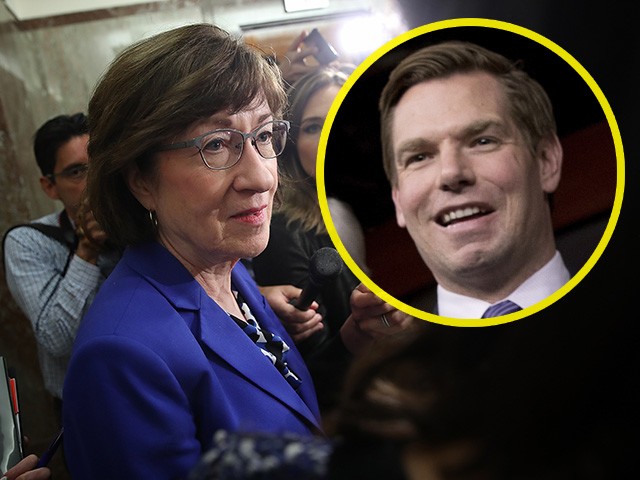 “Boo hoo hoo. You’re a senator who police will protect. A sexual assault victim can’t sleep in her home tonight because of threats,” Swalwell tweeted, referring to reports Kavanaugh accuser Christine Blasey Ford has received death threats. “She’s on her own while you and your @SenateGOP colleagues try to rush through a hearing.”

In his now-deleted tweet, Swalwell — who is considering a presidential run in 2020 — responded to a Hill article detailing the threatening voicemails and phone calls Collins’ office received:

“My office has received some pretty ugly voicemails, threats, terrible things said to my staff,” Collins said in an interview with WVOM on Wednesday.

“Have you seen the emails … where he talked about Roe v. Wade not being settled law. He [bleeped] lied to you. How [bleeped] naive do you have to be?” the caller in the voicemail said.

Just last week, in a widely reported story, on top of other threats and acts of intimidation, Collins’ office received a rape threat:

“The [left’s] frustration has boiled over at points,” the Times understates. “Annie Clark, a spokeswoman for Ms. Collins, provided The New York Times with copies of a letter and multiple voice mail messages addressed to the senator using vulgar language and outright threats.”

One example of a threat is a “caller [who] told a 25-year-old female staff member at one of Ms. Collins’s Maine offices that he hoped she would be raped and impregnated.”

Both Thursday’s Hill report and last week’s report in the far-left New York Times document threats only coming from those opposed to Kavanaugh’s nomination.

Under pressure, Swalwell later tweeted out an apology. “Sexual assault victims deserve respect. And senators shouldn’t be threatened by the public,” he said. “I said something stupid and minimized ugly behavior. That tweet is deleted and I’m sorry for that.”

This minimizing of threats against Republicans comes less than two weeks after a Republican congressional candidate — running for Swalwell’s seat — was attacked with a knife by man making “disparaging” and “profanity-laced” remarks about President Donald Trump and the Republican Party. During that same week, a shooting threat was made against Trump supporters gathering Washington, DC.

Breitbart News has documented over 560 separate acts of violence, vandalism, intimidation, and harassment committed by leftists against Republicans.

Nevertheless, elected Democrats like Swalwell and his allies in the establishment media continue to both ignore and stoke this ongoing epidemic of political violence.