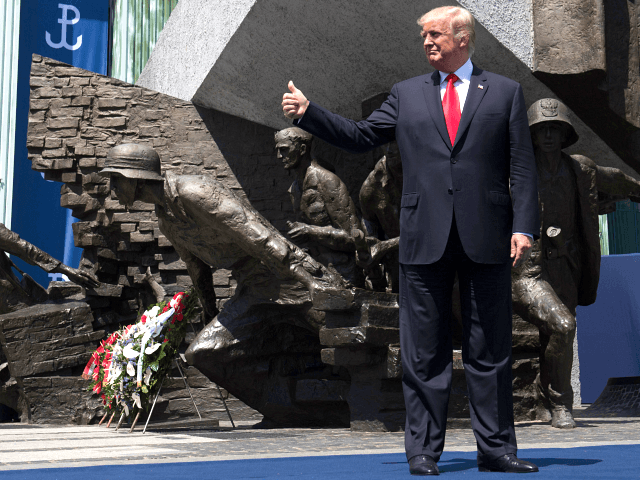 The Polish ambassador to the U.S. and the U.S. ambassador to Poland have penned a joint article hailing the excellent ties which have developed under President Donald Trump, as the Central European country marks 100 years of independence.

Although once Europe’s greatest land empire during the days of the Polish-Lithuanian Commonwealth, famously riding to rescue Western Europe from a Turkish invasion at the gates of Vienna in 1683, by the 19th century Poland had been wiped off the map by its avaricious neighbours — the Austrian, German, and Russian empires.

This state of affairs persisted until the end of the First World War in 1918, when the Allied powers backed a proposal by the United States to make Polish independence a condition of the settlement with Germany and its co-belligerents.

“A hundred years ago this Nov. 11, Poland regained its independence thanks to the efforts of Polish Prime Minister Ignacy Jan Paderewski and President Woodrow Wilson, among others… after 123 years of partition,” explained ambassadors Piotr Wilczek and Georgette Mosbacher in their article.

“Next year, the United States and Poland will also celebrate the centennial of the establishment of diplomatic relations — 100 years of joy, sorrow, tragedy and triumph, but mostly of friendship and shared values.”

“The friendship and cooperation between the United States and Poland determined many of the dramatic milestones of the last century,” the pair observe, noting the late President Ronald Reagan’s support for the Solidarity movement which “helped Poland break free from the Soviet orbit and emerge as a democratic nation” — paving the way for the fall of the Berlin Wall in East Germany and the total collapse of the Communist empire in Europe.

“Today, the friendship and mutual understanding between President Donald J. Trump and President Andrzej Duda enhances the strong history of cooperation between our two nations, which are enjoying a high point in bilateral relations,” the ambassadors added.

The presidential and parliamentary elections which put President Duda and the Law and Justice Party (PiS) in 2015 were an early harbinger of the populist revolt across the West in 2016, which reached its high point with the Brexit vote in Great Britain and the election of President Trump in the United States.

President Trump has indeed enjoyed close relations with Poland’s conservative-populist government since entering office, with them sharing much the same outlook with respect to strong borders and national sovereignty versus mass migration and international globalism.

Their respective administration even signed a ‘Declaration on Polish-American Strategic Partnership’ in September 2018.

Polish President: “There is No Doubt the Growing Wave of Terrorism is Linked to Migration” https://t.co/qCfVt3bwbm

“President Trump, who visited Poland in July last year, fondly recalls the incredibly warm welcome he and the first lady received on the streets of Warsaw,” the ambassadors added.

“President Duda and First Lady Agata Kornhauser-Duda were honored with a similarly warm welcome to Washington, D.C., this past September. People-to-people ties and shared democratic ideals are the heart of our 100-year-old friendship… [T]he bond between the United States and Poland is stronger than ever, and we are ready to face the next 100 years together.”