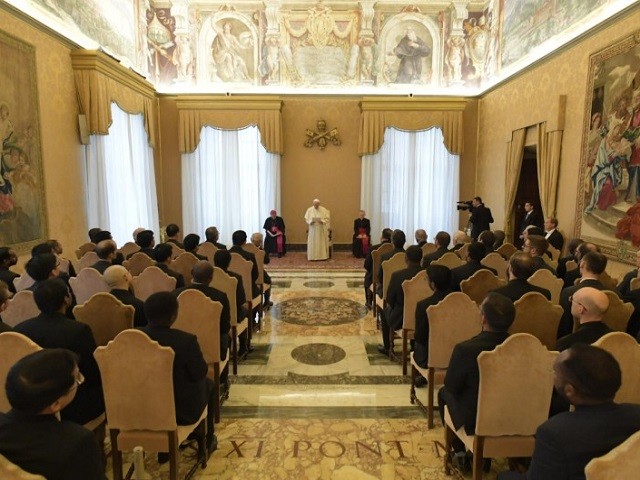 The Vatican hosts “one of the biggest homosexual communities in the world,” alleges French journalist Frédéric Martel in an upcoming book on the Catholic Church and homosexuality.

The explosive exposé, titled In the Closet of the Vatican: Power, Homosexuality, Hypocrisy, will be released on February 21, the very day that Pope Francis has convoked leading bishops from around the world for a Vatican summit on clerical sex abuse.

In the new book, which in other languages bears the more provocative title of Sodom: Power and Scandal in the Vatican, author Frédéric Martel — who is openly gay and an LGBT activist — accuses the Catholic Church of hypocrisy for its opposition to gay marriage and adoption when so many of its own clerics are active homosexuals.

The 576-page book will be released in 8 languages ​​and 20 different countries and is already an Amazon number one bestseller through presales of the text.

Martel asserts that 80 percent of Vatican clergy and prelates are gay, many of them actively so, a figure he claims to have arrived at after a four-year research period in which he enlisted the assistance of 80 researchers and translators and interviewed more than 1500 experts and Church insiders — including 41 cardinals — in 30 different countries.

Among the long list of Vatican prelates Martel “outs” in his book, he makes the surprising claim that Pope Francis himself is “among the queens,” a strange assertion given the pope’s ongoing insistence that young men with ingrained homosexual tendencies are unfit for the Catholic priesthood.

Just this week the Catholic Church in Belgium released a new report on clerical sex abuse that showed that 76 percent of priests’ victims were males, mirroring patterns of chiefly homosexual abuse in other countries.

The Belgian report resembles a study released last September by a sexual abuse commission in Germany documenting more than 3,500 cases of clerical sex abuse involving “mostly male minors” between 1946 and 2014.

Last fall, the Vatican’s former doctrinal chief, Cardinal Gerhard Müller, said it was essential to acknowledge the ties between homosexually active priests and the sex abuse crisis, something he said many church leaders were reluctant to do.

“That McCarrick, together with his clan and a homosexual network, was able to wreak havoc in a mafia-like manner in the Church is connected with the underestimation of the moral depravity of homosexual acts among adults,” said the cardinal, in reference to archbishop Theodore McCarrick, who has been accused of serial homosexual abuse.

Part of the present crisis is that people do “not wish to see the true causes and cover them up with the help of propaganda phrases from the homosexual lobby,” the cardinal said.

Last August, a former papal nuncio to the United States came to a similar conclusion, alleging that an extensive “homosexual network” among bishops and priests was the root cause of the sex abuse crisis as well as cover-ups by bishops.

“These homosexual networks, which are now widespread in many dioceses, seminaries, religious orders, etc., act under the concealment of secrecy and lies,” he stated, “and strangle innocent victims and priestly vocations, and are strangling the entire Church.”

On October 19, Archbishop Viganò released another statement in which he reiterated his belief that a crisis of homosexuality is at the root of the Church’s current scandals, and that former Cardinal Theodore McCarrick, accused of serial homosexual abuse over decades, was just the tip of the iceberg.

According to Viganò, the “underlying reason” why there are so many victims of clerical sex abuse is “the corrupting influence of homosexuality in the priesthood and in the hierarchy.”

This “very grave crisis” cannot be properly addressed and resolved unless and until we call things by their true names, he said. “This is a crisis due to the scourge of homosexuality, in its agents, in its motives, in its resistance to reform.”

“It is no exaggeration to say that homosexuality has become a plague in the clergy, and it can only be eradicated with spiritual weapons,” he said. “It is an enormous hypocrisy to condemn the abuse, claim to weep for the victims, and yet refuse to denounce the root cause of so much sexual abuse: homosexuality.”

“It is well established that homosexual predators exploit clerical privilege to their advantage,” he said. “But to claim the crisis itself to be clericalism is pure sophistry.”