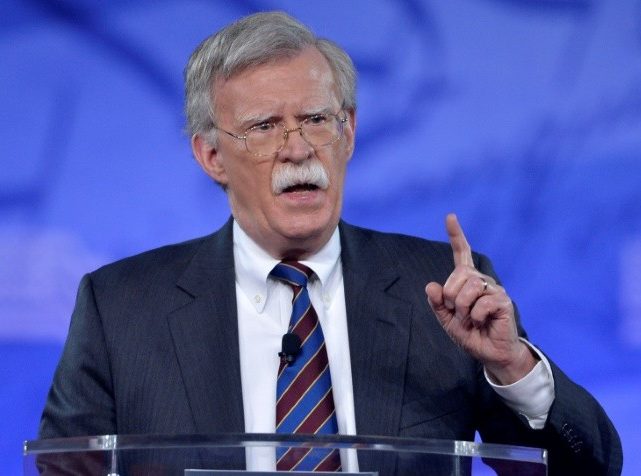 In a speech at the Heritage Foundation, Bolton said:

Great power competitors, namely China and Russia, are rapidly expanding their financial and political influence across Africa. They are deliberately and aggressively targeting their investments in the region to gain a competitive advantage over the United States. …The predatory practices pursued by China and Russia stunt economic growth in Africa; threaten the financial independence of African nations; inhibit opportunities for U.S. investment; interfere with U.S. military operations; and pose a significant threat to U.S. national security interests.

The national security adviser asserted that the new Africa strategy will counter Russia and China.

Echoing the U.S. Department of State (DOS), Bolton indicated that China is using so-called “debt traps” to encourage financial dependency and undermine the sovereignty of the borrowers, noting: “China uses bribes, opaque agreements, and the strategic use of debt to hold states in Africa captive to Beijing’s wishes and demands. Its investment ventures are riddled with corruption, and do not meet the same environmental or ethical standards as U.S. development projects.”

The national security adviser said that China’s “predatory” financial practices are a component of its ambitious multi-trillion dollar One Belt, One Road (OBOR) project, also known as the Belt and Road Initiative (BRI), which some U.S. military officials consider a threat to the United States.

Beijing’s “predatory actions are sub-components of broader Chinese strategic initiatives, including ‘One Belt, One Road’—a plan to develop a series of trade routes leading to and from China with the ultimate goal of advancing China’s global dominance,” Bolton explained, stressing that China is actively seeking to “obtain more political, economic, and military power.”
Djibouti, which is located in the Horn of Africa, houses China’s first overseas military base, which experts like Judd Devermont from the Center for Strategic and International Studies (CSIS) believe may hinder U.S. military access and operations. The base is located a few miles from America’s Camp Lemonnier

“The balance of power in the Horn of Africa, a major artery of maritime trade between Europe, the Middle East, and South Asia,” is at risk of shifting “in favor of China. And, our U.S. military personnel at Camp Lemonnier [Djibouti], could face even further challenges in their efforts to protect the American people,” Bolton said, citing Djibouti’s intent to give a Chinese state-owned company control of a port on the Red Sea.

Between 2016 and 2017, China’s foreign direct investment toward Africa reached $6.4 billion, he observed, adding that “over the past several years, China has devoted considerable state-directed and state-supported financing to projects in the region.”
The U.S. government devoted $17 billion in development, security, and food assistance to Africa during the same period.

“Unfortunately, billions upon billions of U.S. taxpayer dollars have not achieved the desired effects. They have not stopped the scourge of terrorism, radicalism, and violence. They have not prevented other powers, such as China and Russia, from taking advantage of African states to increase their own power and influence,” Bolton conceded.

Although Devermont and other experts told a Senate panel on Wednesday that China has emerged as the top U.S. competitor in Africa, Beijing is not the only American adversary with a presence on the continent.
Bolton noted:

Russia, for its part, is also seeking to increase its influence in the region through corrupt economic dealings. Across the continent, Russia advances its political and economic relationships with little regard for the rule of law or accountable and transparent governance.  It continues to sell arms and energy in exchange for votes at the United Nations—votes that keep strongmen in power, undermine peace and security, and run counter to the best interests of the African people.  Russia also continues to extract natural resources from the region for its own benefit.

The U.S. military has expressed concern about Russia’s involvement in Libya.

According to Bolton, Libya continues to serve as a “fertile ground” for the local Islamic State (ISIS/ISIL) affiliate “to recruit new terrorists and plot attacks against the United States.”

U.S.-backed local forces pushed ISIS out of Libya’s coastal region of Sirte, once considered the group’s largest stronghold outside its now fallen caliphate in Iraq and Syria. However, ISIS is reportedly regrouping and continues to threaten the country.

During the Senate panel hearing on Wednesday, the CSIS expert and other analysts told lawmakers that China is using its economic clout in Africa to promote a “new international order” and encourage countries to adopt its communist ideology.

Bolton said Trump’s Africa strategy seeks to advance U.S. trade and commercial ties with nations across Africa; counter the growing threat from “radical Islamic terrorism” and all other violent conflicts, and ensure that U.S. aid is used efficiently and effectively.