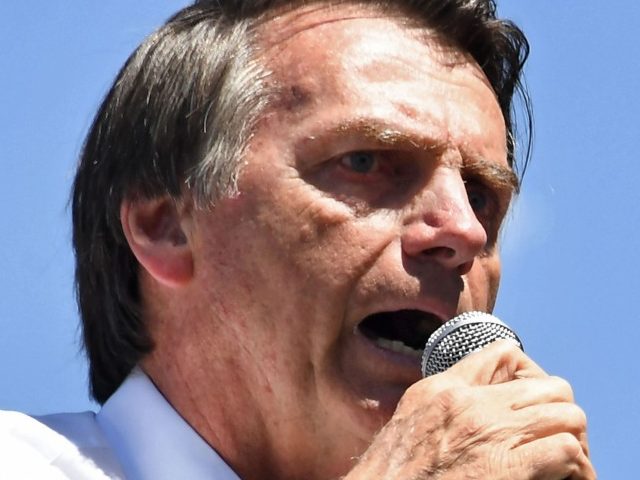 Brazil’s President-elect Jair Bolsonaro told a crowd at an assembly of Latin American conservatives in his native country this weekend that he feels, as Latin America’s largest economy, Brazil has an “obligation” to fight the leftist regimes in Cuba, Venezuela, Bolivia, and elsewhere.

Bolsonaro addressed a crowd at the Conservative Summit of the Americas, a convention organized by his son and lawmaker Eduardo Bolsonaro featuring prominent pro-freedom right-wing voices from across the hemisphere held in Foz do Iguaçu, Brazil. The summit is intended as a response to what is now known as the Sao Paulo Forum, organized by the Brazilian socialist Workers’ Party (PT) in the 1990s to help leftists in Latin America coordinate messaging and policy execution.

The elder Bolsonaro addressed the crowd on Saturday from his bedside, where he continues to recover from major abdominal surgery after being the victim of an assassination attempt in September. A self-identified socialist approached Bolsonaro at a campaign rally in Minas Gerais state and attempted to stab him to death. Bolsonaro survived, but only after significant reconstructive surgery that has limited his public appearances.

At the Conservative Summit, Bolsonaro applauded those that had convened for “not desisting, not losing hope, and keeping the flame of liberty alive.” He urged those listening to jointly “combat the objectives of the Sao Paulo Forum” and aid the “wide struggle for freedom, democracy, and free commerce.”

The first key to winning the struggle, he argued, is to leverage the tremendous influence that a country as large as Brazil has on its neighbors and bring hope to freedom fighters under repressive regimes. All of Latin America “knows what the consequences of the left are. The clearest example is Cuba, and the nation that most clearly approximates that reality is Venezuela.”

Bolsonaro classified as an “obligation” that his government will carry when he is sworn in on January 1 supporting anti-leftist groups across North and South America. Brazil will “join other nations” to fight for “democracy, freedom.”

“We will not leave the Cuban people,” he promised.

Cuba remains Latin America’s most left-wing nation and its only openly communist one. Allies like Venezuela, Nicaragua, and Bolivia claim instead to be “socialist,” as Brazil did for most of the 21st century. Cuba maintains close ties to the totalitarian regimes in China, North Korea, and Iran, providing dangerous access to the continent.

Cuban pro-democracy activists have invested decades in fighting the regime and compiling evidence of its significant human rights abuses. A Cuban exile organization, Justice Cuba, announced this week that the evidentiary phase of their efforts to prosecute Cuban regime officials for crimes against humanity has ended. At the Organization of American States (OAS) last week, Cuban victims of political violence told their stories and urged the nations of the world to prosecute Cuban government agents. Many described arbitrary beatings, electroshock, starvation, rape, and other tortures used against them while imprisoned for their political beliefs.

As a term of art, “crimes against humanity” largely consists in crimes commonly known as “war crimes” that were committed outside of the theater of war and all the world’s courts have universal jurisdiction to try those indicted for them.

At Saturday’s summit, Rep. Eduardo Bolsonaro suggested that Brazil would welcome the prosecution of Cuban human rights criminals under his father’s administration. “It would bring great satisfaction to Brazil to receive such a tribunal,” the younger Bolsonaro said, suggesting that human rights criminals from Venezuela and Nicaragua could also face prosecution in Brazil.

The president-elect has already taken measures to curb Havana’s influence in Brazil. Last month, Bolsonaro announced that Cuba would no longer be able to export doctors to Cuba under a slavery system known in Portuguese as “Mais Médicos,” or “More Doctors.” Socialist former President Dilma Rousseff launched the Mais Médicos program, sending thousands of Cuban doctors to work on a “living stipend” without pay into some of Brazil’s poorest communities. Bolsonaro demanded that Cuba pay the doctors rather than pocket the money Brazil paid for them and insisted that Brazil should have the right to test Cuban doctors to ensure they meet the standards of domestic medical professionals. Cuba announced an end to the program within a week of Bolsonaro’s remarks, forcing the doctors to return home. Bolsonaro offered the doctors political asylum in Brazil if they chose to stay, which many are expected to embrace.