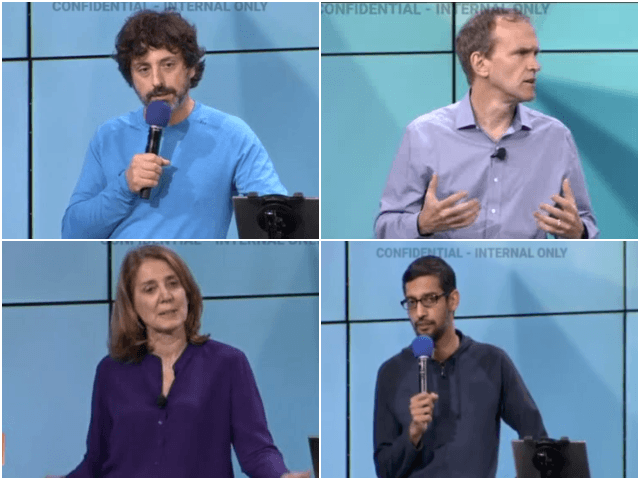 Many moments in the Google Tape were revealing, but also illuminating was what consistently failed to appear: dissent. Not one Google employee dared to challenge the one-party mindset displayed in the room. And why would they?

Conservative and Trump-supporting employees in the audience (and we know at least one of them was there) heard the company’s co-founder link their motivations to “extremism” and “fascism,” saying he was “deeply offended” by their decision. Google VP for Global Affairs Kent Walker said populism and nationalism were motivated by “hatred and xenophobia.”

Why would anyone have spoken up, when their company’s management made it clear that their democratic decision was xenophobic and offensive?

The closest anyone came to challenging the groupthink on stage was at the very end, when an employee asked if Google’s leadership had anything positive to say about Trump’s election. They all laughed.

Google didn’t develop groupthink by accident. After all, moments before calling for a group hug over the election results, CFO Ruth Porat repeatedly referred to the Clinton campaign as “we,” choking back tears as she recalled the moment she realized “we were going to lose.”

The executives on stage made it very clear that the company has a set of “values” that they expect all employees to follow. “The election conflicts with many of our values,” says Google co-founder Sergey Brin.

Google will “use the great strength and resources and reach we have to continue to advance really important values” promises Chief Financial Officer Ruth Porat.

“[It was] a very hard cycle, especially with our values,” says CEO Sundar Pichai “We are so deeply committed to our values… Nothing will change… We will stand up always for the values we believe in.”

And what are those values? Watch the whole video, and they quickly become apparent:

The uniformity of opinions among the company’s top executives would be unusual even in a partisan media publication. In a supposedly neutral corporation, that wields more power over the flow of information than any other organization in history, it is shocking.

A newspaper like the New York Times, with its well-known liberal editorial line, has displayed more diversity of opinion than Google. Indeed, the Times even ran a column defending politically centrist Google employee James Damore, after Damore was fired by the tech giant after he disagreed with the company’s far-left policies.

How is the far-left New York Times – which, as a publisher, is allowed to have an editorial slant – more politically tolerant than Google? Given its vast power over information, and the trust it requires from users of all political stripes, you’d think the search giant’s executives would work extra hard to display an attitude of non-partisanship.

Instead, they’re crying on stage over a Democrat’s defeat and emphasizing a cult-like commitment to shared “values.”

Only one executive on stage — People Operations VP Eileen Naughton — explicitly referenced conservative employees within the company, saying they “haven’t felt entirely comfortable revealing who [they] are.” But she herself cracked jokes about employees moving to Canada following the election, and made no effort to contradict fellow executives who compared Trump supporters to fascists and xenophobes.

Despite’s Naughton’s admission that conservatives at the company feel uncomfortable, Google told Breitbart News that “everyone at Google has been able to freely express their opinions at these meetings.

The company also denied their executives’ biases ever trickled down into their product.

“Nothing was said at that meeting, or any other meeting, to suggest that any political bias ever influences the way we build or operate our products. To the contrary, our products are built for everyone, and we design them with extraordinary care to be a trustworthy source of information for everyone, without regard to political viewpoint.”

Again, that contradicts what the company’s own executives say in the leaked video. Sergey Brin and Pichai both reference “Jigsaw,” Google’s anti-extremism project, which among other things develops tools to redirect people away from extremist material in search results. But they aren’t discussing the project in the context of an actual extremist group, like ISIS — they discuss it in the context of Trump’s election.

Pichai, responding to a question about “low-information voters” sharing “fake news,” says that the company’s work on “machine learning” is an area of opportunity.

Meanwhile, Ruth Porat talks about using the “great strength and resources and reach we have to continue to advance really important values.”

Kent Walker says Google must ensure that the rise of populism and nationalism around the world doesn’t turn into “a world war or something catastrophic … and instead is a blip, a hiccup.”

How can anyone believe Google’s assurance that it doesn’t bias its products, when the company’s executives actively brainstormed ways to stop the populist movement, just days after Trump’s election? Especially when they reference Google tools like Jigsaw and machine learning?

But even if, by some miracle, Google hasn’t intentionally tweaked its products to harm the populist movement, that doesn’t mean they won’t do it by accident. Remember, the company had to withdraw a fact-checking feature earlier this year after it was revealed that it almost exclusively fact-checked conservatives. Intent or no, groupthink at Google will affect Google’s products. And in that video, the groupthink is overwhelming.