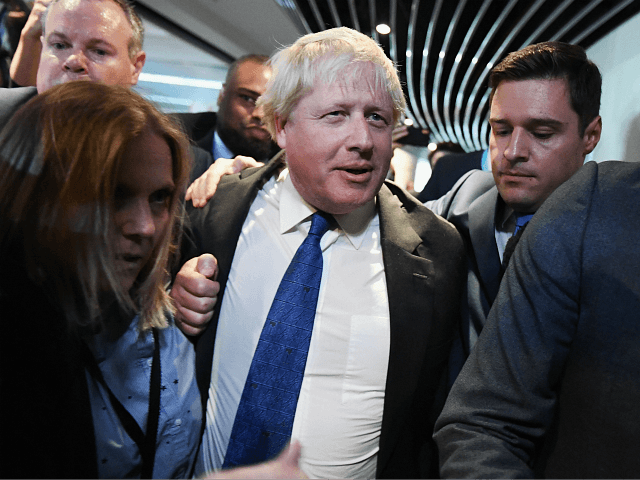 Former foreign secretary Boris Johnson has called for London police to resume the “systematic stop and search” of those suspected of carrying weapons after the practice was curtailed by then-Home Secretary Theresa May.

During a robust alternative Tory Party conference speech in Birmingham on Tuesday where he defended conservatism and wealth creation, the former Mayor of London addressed “making the streets safer”.

“Don’t you think it’s time we brought back systematic stop and search to end the politically correct nonsense that has endangered the lives of young people in our capital and elsewhere?” Mr Johnson said to applause at the packed-out event put on by the ConservativeHome website at the International Convention Centre.

Boris Johnson says it is a “disgrace that no banker went to jail for the crash of 2008”, then argues against nationalisation and then adds “by the way, don’t you think it’s time we brought back systematic stop and search to end the politically correct nonsense?” pic.twitter.com/KbOp138Saq

Under the mayorship of Mr Johnson from 2008, London police deployed the use of stop and search, a tactic progressives and leftists claim disproportionately targets young, black men.

However, in 2014 as then-home secretary, Mrs May cut police use of stop and search, alleging the tactic was “unfair, especially to young black men”, which led to a dramatic fall in the use of the powers — and knife crime soaring to a five-year high by the end of 2016.

When Labour Mayor Sadiq Khan — referred to as “hashtag-useless-Khan” by Johnson in Tuesday’s alternative conference speech — took office in 2016, he vowed to further reduce the powers of the police powers, contributing to a steep climb in knife crime.

‘This is the Moment to Chuck Chequers’: Boris Comes Out Swinging in Defence of conservative Principles, Brexit https://t.co/114r9cNxsM

Addressing the energised audience on Tuesday, Mr Johnson attacked the Labour Party, warning that a Labour government would “wreck the economy. They would drive away investment.”

“Surely we can take on this Tony Benn tribute act and wallop it for six, not by imitating them… but by systematically pointing out the damage they would do,” he said.

“We cannot let this weaselly cabal of superannuated Marxists, Hugo Chavez admiring, anti-Semitism condoning Kremlin apologists anywhere near the government of this country.”

The Brexiteer also levelled criticism at Labour Party leader Jeremy Corbyn as “a man who takes money from Iranian [state-controlled] TV and who cannot bring himself to condemn the Russian state for the Salisbury atrocity and who indulges in anti-Semitism and who opportunistically now commits himself to a second referendum reveals himself to be the patsy of the EU”.