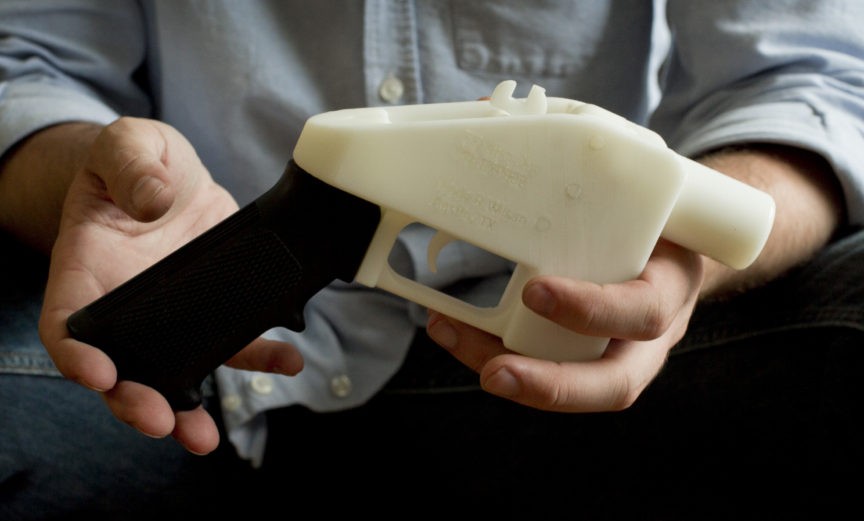 Probably no 27 words in our founding documents have caused so much controversy as have those comprising the Second Amendment’s guarantee of the right to keep and bear arms; except, perhaps, the ten words in the First Amendment that protect freedom of speech.

A well regulated Militia, being necessary to the security of a free State, the right of the people to keep and bear Arms, shall not be infringed.  (Second Amend., U.S. Const.)

The powers not delegated to the United States by the Constitution, nor Prohibited by it to the States, are reserved to the States respectively, or to the people. (Tenth Amend., U.S. Const.)

When these two Amendments intersect, get ready for a constitutional free-for-all; which is exactly what we have in the ongoing litigation between a private company (Texas-based Defense Distributed) and several state attorneys general, led by Washington State’s anti-gun Bob Ferguson.  Adding to the constitutional melee, and fearful of the catastrophe Defense Distributed’s action might visit on the world, Ferguson and his colleagues have shoe-horned in the Tenth Amendment as a shield behind which they should be allowed to put the company out of business.

The heart of the controversy is clear — whether government (in this case, state government, not Uncle Sam) can prohibit a company from making software instructions for firearms parts available to the public.  So-called “3-D Firearms.”

It is common knowledge that the Internet is replete with instructions to manufacture all manner of items big and small – from jet engines to paper airplanes; printing presses to children’s coloring books. Just Google “DIY” (“Do It Yourself” for old schoolers), and every conceivable item or device is there for the looking. Want to learn how to disassemble/assemble a bolt-action hunting rifle or a 9mm handgun? Google it.

Unlike the vast majority of items for which you might query the Internet for assembly instructions, a firearm is something explicitly protected against government “infringement” by the Bill of Rights.  This was affirmed by the U.S. Supreme Court in its 2008 Heller opinion; which cautioned that the right to possess a firearm was not absolute. So as not to run afoul of that holding, the software instructions Defense Distributed had been making available applied only to lawful firearms (no instructions for fully automatic guns).

Consistent with the notion that both the Second and the First Amendments applied to Defense Distributed, last summer the federal government (specifically, the State Department) agreed with then-CEO Cody Wilson (who recently stepped down after being charged with offenses unrelated to the company or firearms), that a five-year-old regulatory decision banning him from posting the software on line, should be lifted. This sent Ferguson and his fellow gun-fearing attorneys general into full “Chicken Little” mode. They cried out that allowing such software to be sold, or even offered free of charge to someone, presented an immediate and serious threat to America’s national security; fretting that terrorists might thereby learn how to “print” guns.

The fact that such information already was available on line and in print, was of no importance to these purveyors of fear; nor did they seem to realize that terrorists already have ready access to weapons of all sorts and quantities.  Even though none of these state attorneys general had anything to do with the dispute between the State Department and Defense Distributed, they raced into court to shut down the agreement.  Not surprisingly, they found a sympathetic judge, and the company was enjoined from proceeding. Thankfully, that injunction is being challenged.

Sound constitutional jurisprudence dictates that Defense Distributed has every right under the Free Speech clause of the First Amendment, to distribute information relating to a lawful product; especially one explicitly protected by the Bill of Rights.  Fearing they might lose their case on those grounds, however, the attorneys general expanded their arguments against such civil liberties, to argue that the Tenth Amendment shields them from being stopped in their crusade.  They assert that the language in that Amendment, which actually serves to limit federal government power, provides authority for the states to prohibit activities guaranteed against being prohibited.

If one finds such arguments confusing and bordering on nonsensical, it is because they are. Yet the fear of firearms that has come to infect virtually every sector of contemporary society, has produced an atmosphere in which such positions are routinely endorsed by government officials at all levels.

Most worrisome, however, is the danger that judges such as those who have succumbed to the fear-mongering at the root of the Defense Distributed cases, will not be overruled by higher courts, including the Supreme Court. This is another reason why it is so important that Judge Kavanaugh – who does understand the First, Second and Tenth Amendments – was confirmed to the High Court.

Bob Barr is a former Congressman, current President and CEO of the Law Enforcement Education Foundation, and a guest writer for “Down Range with AWR Hawkins.”