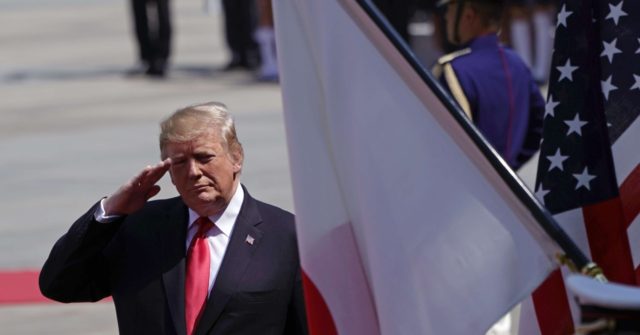 President Donald Trump has improved relations with every one of America’s allies — except one: Germany.

You will not learn that from reading the news. The prevailing dogma in the mainstream media reflects the Democratic Party’s revisionist propaganda, which obscures the fact that Barack Obama disrupted relations with our allies in an effort to appease Russia, Iran, and other enemies.

But search the world, and you will not any allies — save one — where Trump has made our relations worse.

Do not rely on opinion polls. The public perception of the United States abroad is shaped by CNN and the New York Times, the major sources of American news overseas; and is also guided by foreign media and cultural elites, who are vehemently anti-Republican, if not also anti-American.

Look, instead, at the relationships between governments.

Start with Israel, where Obama made a deliberate effort to create “distance” between our government and theirs. Today Donald Trump is a hero to Israelis for affirming their sovereignty in Jerusalem and the Golan Heights. Israel’s Arab neighbors, including our Saudi allies, are also grateful for Trump’s backing against Iran.

Or take Japan, where President Trump concluded a very successful visit last week. To be sure, there are differences between the two countries on issues like North Korea and trade. Yet President Trump and Prime Minister Shinzo Abe have forged a close friendship.

Trump drove a hard bargain on trade with South Korea, but reached an agreement that benefited both nations, and has done more than any U.S. president since Eisenhower to bring peace to the peninsula. He has won praise from the Philippines for standing up to China, and from India for his willingness to cut off aid to Pakistan due to the latter’s support for radical Islamic terror groups.

In Canada, Trump has feuded with Justin Trudeau — but also forged the new U.S.-Mexico-Canada Agreement on trade. And Trump has found new allies in a Latin America that is rejecting the left — in Brazil, Colombia, Guatemala, and elsewhere.

In Europe, President Trump has restored our close bonds with the former communist nations — ties that Obama strained when he abandoned missile defense and allowed Russia to invade Ukraine. He has succeeded in increasing member nations’ contributions to NATO. In Britain, Italy, and elsewhere, Trump has made common cause with nations that are embracing the principle of national sovereignty.

France presents a more complicated picture. Trump irritated the French — and the American left — by withdrawing from the Paris Climate Accords (even though many who backed that agreement now admit it is meaningless). But he has also reached out to embrace the French, hosting the French president for his first state dinner.

That leaves Germany, whose leader, Chancellor Angela Merkel, delivered a rebuke to Trump on U.S. soil last week at Harvard: “Tear down walls of ignorance and narrow-mindedness,” she declared. Trump has demanded Germany pay its share of NATO expenses and that German companies stop coddling Iran. Trump has also irked Merkel by backing Britain’s effort to leave the European Union.

But those are the kinds of arguments we need. U.S. Ambassador Richard Grenell has made clear that we expect Germany to provide better leadership in Europe — not to become so dependent on Russian gas that it cannot resist Vladimir Putin’s geopolitical ambitions, so corrupted by Iranian oil that it cannot stand up to the mullahs, so socialist that it cannot contribute to the common defense.

Germany is the exception that proves the rule. What the media call Trump’s “belligerent isolationism” is actually a restoration of traditional American leadership in the world through the pursuit of American interests.

Trump defends our allies, and confronts our rivals (including Russia), through a mix of force and diplomacy. That is why he stands tall on the world stage — and we, too, stand taller with him.