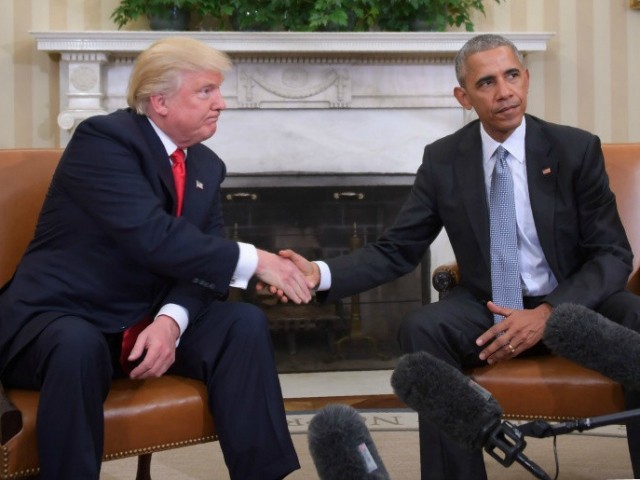 President Donald Trump should preemptively pardon former President Barack Obama for any crimes he may have committed in “Obamagate,” the effort by the previous administration to frame the incoming one for “Russia collusion.”

Attorney General William Barr said on Monday: “The law enforcement and intelligence apparatus of this country were involved in advancing a false and utterly baseless Russian collusion narrative against the president,” i.e. against Trump.

He added that the ongoing investigation by U.S. Attorney John Durham will “determine whether there were any federal laws broken” in the effort to undermine Trump. “And if there were, those who broke the laws will be held to account.”

The most-reported line from Barr’s press conference was that he did not expect there to be a criminal indictment of Obama or of former Vice President Joe Biden. But he also added that was “based on the information I have today.”

Thus far, we know that President Obama was aware of, and may even have directed, the snooping on incoming National Security Advisor Michael Flynn. However, is it not clear that Obama’s involvement reached a criminal level. Some members of the outgoing administration may have believed — sincerely, if wrongly — that there was something to the “Russia collusion” conspiracy theory spun by Hillary Clinton’s campaign, the Democratic Party and the FBI.

Just as there was a legitimate national interest in finding out whether Vice President Biden had been compromised by his son’s dubious dealings with Burisma, the corrupt Ukrainian energy company — even though the revelations may have helped Trump’s re-election chances — so, too, there was arguably a national interest in 2017 in finding out if the incoming administration was compromised by Russia, even if the basis for that suspicion turned out to be fraudulent.

Obama may have had additional motives to monitor Flynn, beyond personal pique (he had fired Flynn as director of the Defense Intelligence Agency, for which Flynn repaid him by campaigning for Trump). Obama may have wanted to protect the Iran deal, which Flynn opposed. Obama also wanted to punish Israel on his way out the door by allowing a U.N. Security Council resolution that declared the Jewish State’s presence in the historic capital of Jerusalem illegal.

The incoming administration had a very different policy toward Israel. So the President-elect’s team mobilized to prevent the resolution from passing, if possible — perhaps even by convincing Russia to oppose it. That probably accounted for some of Flynn’s conversations with Russia in December 2016. And just as Obama spied on Americans during the Iran deal debate, he was prepared to do so again to make sure the anti-Israel resolution went through.

But once the authorities knew the “Russia” suspicions were baseless — that Flynn was just coordinating policy —  they should have stopped. We now know that then-FBI Director James Comey told Obama that Flynn had not passed classified information to Russia. (We know it thanks to Acting Director of National Intelligence Richard Grenell, who recently declassified the last portion of an email that Susan Rice, Flynn’s predecessor, wrote before leaving office.)

Yet Obama allowed the monitoring to continue. We know that he also gave Comey the green light to share the most salacious contents of the phony “Steele dossier” with Trump the next day — partly to see what his reaction would be. Vice President Biden was in the room on Jan. 5, 2017, when that happened. Comey admits that he took things further, sending agents to trap Flynn in the White House. We do not know who leaked Flynn’s name to the Washington Post, which may have been illegal, but we know the FBI leaked like a sieve. None of that was in the national interest.

So we seem to have two efforts to pursue Flynn and the incoming administration. One, coordinated by Obama, was shielded by the pretext of the national interest. Another, possibly centered around Comey, had nothing to do with national interests and may have been driven by his desire to compensate for his role in inadvertently electing Trump.

It could be that Obama’s actions — in which Biden took part, at least passively — set events in motion that had the foreseeable consequence that crimes might be committed — crimes described by Flynn’s lawyer, Sidney Powell, as including obstruction of justice.

It is also possible that the people who committed those crimes took matters a step further than Obama intended, or could have foreseen. And executive privilege could make the truth harder to find.

Barr warmed against “a tit for tat exercise,” politicizing justice or “lower[ing] the standards” just to punish Obama for doing the same. “Not every abuse of power, no matter how outrageous, is necessarily a federal crime,” he cautioned.

Still, if the goal is to restore public confidence in the justice system, the only way is to wipe the slate clean. And the only way to do that would be for Trump to pardon Obama and Biden, preemptively, for the sake of national unity.

It would, of course, drive Obama, Biden, the Democrats, and the media crazy. Pardoning Obama and Biden would, by itself, imply that they had done something wrong — which is exactly why Trump might find it politically useful.

But beyond politics, the only practical course may be one in which the aggrieved party himself ends the cycle of investigation — at least regarding the former president and vice president. And let the rest of them face justice.