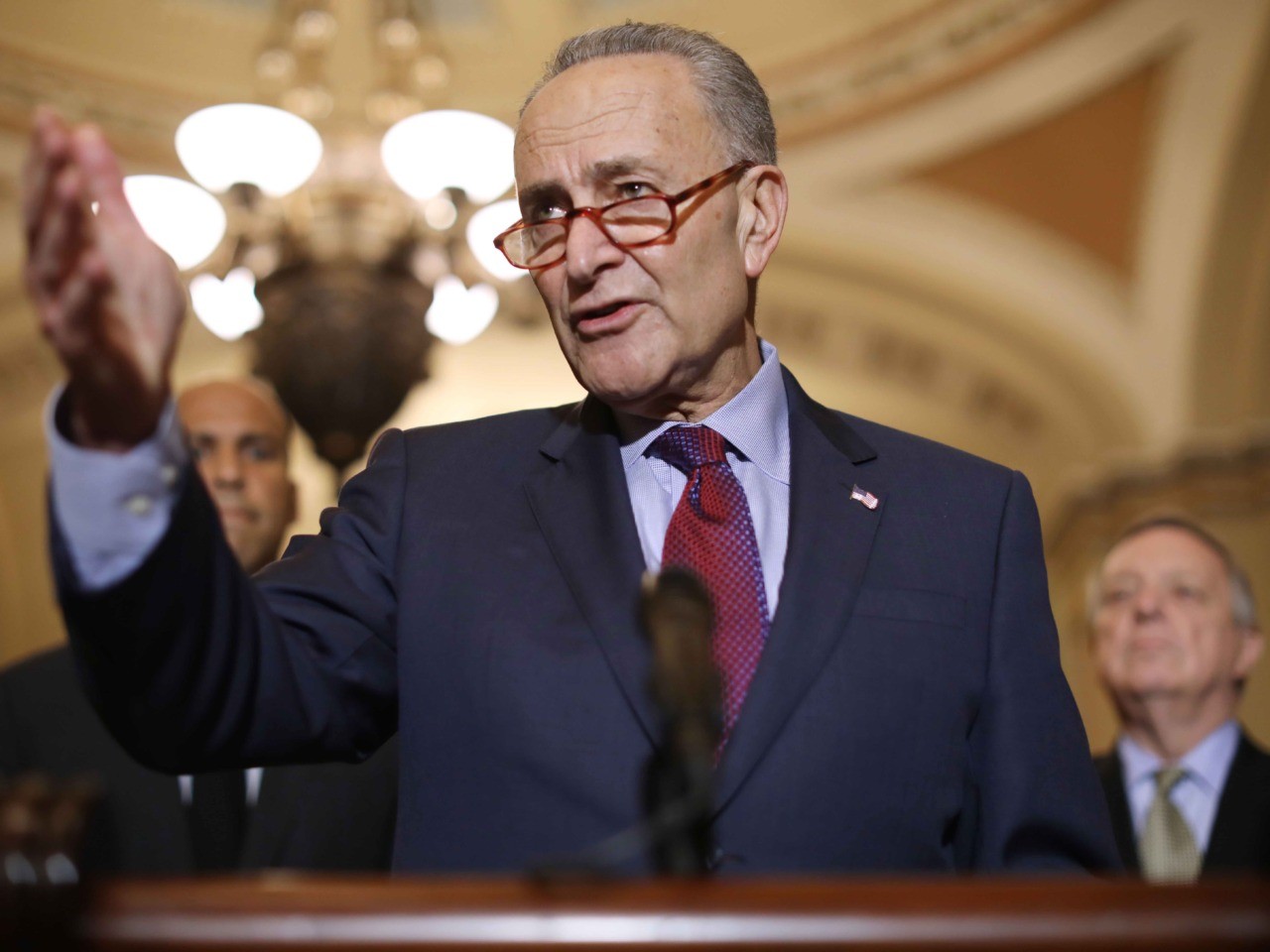 Senate Minority Leader Chuck Schumer (D-NY) seems to think the 1990s never ended. For the second time this year, he has called on the Democrats’ playbook from the Clinton era. And for the second time, he has failed, spectacularly.

In January, Schumer shut down the federal government, hoping to win as President Bill Clinton won in 1995-6, only to surrender without gaining anything. Now, just before the midterm elections, his effort to recreate the Clarence Thomas-Anita Hill outrage is backfiring.

Schumer and House Minority Leader Nancy Pelosi (D-CA) — who hopes to become Speaker of the House again if Democrats win in November — have shown Americans exactly how Capitol Hill would run if they were in charge. Obstruction, protests, left-wing mobs — and, worst of all, the attempted humiliation of Judge Brett Kavanaugh, an upright man and devoted public servant.

Nobody expects the Spanish Inquisition, but that’s what the Democrats have on their agenda if they retake Congress.

The 2018 midterms were supposed to be all about President Donald Trump and his “style.”

Then Schumer’s team turned the Kavanaugh hearings into the Salem witch trials, and now Democrats sound worse than the president — even to people who hate his rhetoric.

That is the reality beneath the striking new poll numbers that show Republican voter enthusiasm surging to match Democrats’. Suddenly Republicans have a fighting chance to keep the House, and red-state Democrats are in trouble in key Senate races.

There is more at work here than male voters suddenly feeling vulnerable, or feeling empathy for Kavanaugh in his torment. The electorate as a whole has watched Democrats trash basic principles of justice and destroy a good man for political gain.

To many — if not most — Americans, that is far scarier, on a personal level, than Trump insulting the Attorney General or insulting journalists.

If the principle of “innocent until proven guilty” is destroyed, then none of us is safe from the state.

Democrats made their own bed here, in two ways. First, they tried to turn the Kavanaugh hearings into a catalyst for another “Year of the Woman,” which Sen. Dianne Feinstein (D-CA) has been conjuring since the #metoo movement first appeared on the scene in 2017.

Feinstein, who withheld Dr. Christine Blasey Ford’s accusations until after the formal confirmation hearings were over, has played a key role in this debacle — one that Sen. Lindsey Graham (R-SC) now says must be fully investigated.

Second, Democrats have been telling the world for five years that the criminal justice system is fundamentally broken — that cops shoot African-Americans and Latinos with little hesitation and few consequences; that our courts treat poor and minority defendants worse than white defendants; and that private prison operators scheme to keep the flow of inmates high.

These claims, true or not, have been effective: they are chiefly responsible for the steep decline in race relations that began in 2013.

Brett Kavanaugh is a son of privilege and is already, on the D.C. Circuit, one of the most powerful and esteemed judges in the whole system. But Democrats have been so successful in popularizing the idea that justice is basically a matter of politics and prejudice that it is not hard to see him, sitting before the Senate Judiciary Committee, as a victim, like others.

Indeed, nothing has been so persuasive on that point as the spectacle of watching Kavanaughlife nearly ruined in mere days over an unproven accusation.

At Schumer’s urging, Democrats have pushed ahead, knowing that their base in the so-called “Resistance” wants to see them fight hard. At first, Democrats’ tactics were merely disruptive — like coordinating with each other to interrupt the confirmation hearing, or defending the protesters’ absurd outbursts from the gallery.

But when Democrats started hyping Ford’s allegations — coordinating with activist lawyers and the liberal media — they unleashed something much more frightening, recalling the worst days of the McCarthy hearings.

Schemer promoted the vicious lie that Kavanaugh faced “multiple, corroborated allegations.” None of the allegations has been corroborated — in fact, they have been contradicted by all the key witnesses.

The left tried to laugh when Graham — for years, a voice for bipartisanship in judicial confirmations — finally had enough, and told Democrats the truth to their faces: that they had destroyed the system for the sake of power.

Leftists took snapshots of an angry Graham, in mid-tirade, and called him the “hideous hateful face” of male intolerance. They failed to realize they were looking at their own reflection.

It should have been hard to outdo Trump for fear. But Democrats did it — and now Republicans now have a chance.

They can thank Schumer, who forgot what Republicans learned the hard way in 1998: voters don’t like inquisitions.