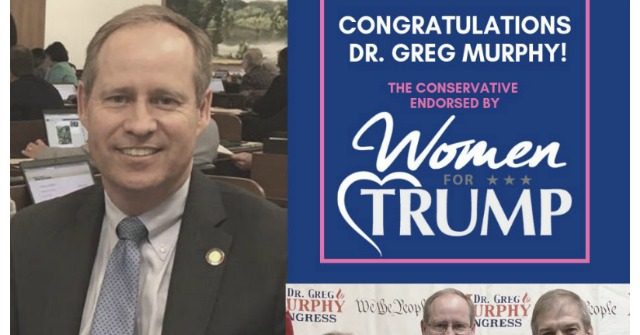 Murphy was announced the winner of the third district shortly after polls closed on Tuesday. His opponent, Allen Thomas, a former mayor of Greenville, North Carolina, put up a strong fight for the heavily conservative seat and raised more than $560,000.

Although the final tally is not yet available, Murphy’s margin of victory is likely to run into the double digits.

The 3rd congressional, which covers a substantial portion of eastern North Carolina, including the Outer Banks, became open earlier this year when the longterm incumbent, Rep. Walter Jones (R-NC), passed away. The district is one of the most of the conservative in the entire state, with President Donald Trump having carried it overwhelmingly in 2016.

Despite the district’s conservative bent, the 3rd became a battleground between establishment Republicans and allies of President Donald Trump heading into the primary for the special election.

Murphy, who represented portions of the district in the North Carolina House of Representatives, was favored by grassroots conservatives and Freedom Caucus heavyweights like Reps. Mark Meadows (R-NC) and Jim Jordan (R-OH). His main primary opponent, Dr. Joan Perry, was backed by a bevy of Washington, D.C. special interests tied to the establishment.

One of Perry’s largest backers was Winning For Women, a group run by Rep. Elise Stefanik (R-NY), which claims its goal is to elect more women to the House Republican Caucus. In reality, the group has used its ties to establishment figures like former Speaker Paul Ryan (R-WI) to intercede in primaries and back moderate candidates. To that end, Winning for Women spent nearly $900,000 on Perry’s behalf ahead of the primary.

Republican voters ,however, were not sold and overwhelmingly backed Murphy for the nomination, 59 percent to 40 percent.

“Dr. Greg Murphy made a decision to side with the forgotten man and woman, support President Trump and trust that large sums of special interest money would not command the most support at the ballot box,” Meadows told Breitbart News shortly after Murphy won the primary. “His decision was rewarded … as it will be each and every day he chooses to support North Carolina values over DC special interests. His servant’s heart won the day.”