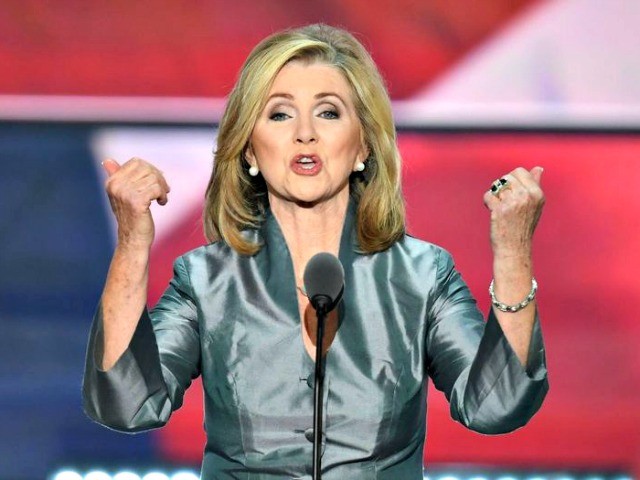 President Donald J. Trump rallied supporters in Tennessee Monday night, promoting several candidates in the state before introducing Rep. Blackburn, who is running for U.S. Senate in the state.

The enthusiastic crowd began chanting, “Martha” as Blackburn took to the podium.

The congresswoman thanked the crowd and thanked the president for coming to Tennessee, declaring that Tennessee loves him. “Thank you for sending Donald J. Trump to the White House,” said Blackburn. “He has had an amazing 20 months.”

She listed some of the Trump administration’s accomplishments, specifically thanking Trump for moving the U.S. Embassy in Israel to Jerusalem.

“I know the Democrats keep saying there’s a blue wave coming; when that blue wave gets to the state line it is going to run smack dab into the great red wall, and that is every single one of you, so if you want a U.S. Senator who is going to stand with the president, build the wall,” and support men and women in uniform, she asked the crowd to stand with her.

“She’s got Tennessee values,” Trump said as he returned to the podium. He said a vote for her is a vote for him.

He then hit Blackburn’s Democrat opponent Phil Bredesen. Trump noted Bredesen supported driver certificates for illegal aliens. He said if Democrats get 51 seats in the Senate, then Chuck Schumer would be majority leader. Schumer is so desperate for Phil to win,” Trump said. “Marsha will be a great, great Senator,” said Trump who added that the Republicans need the votes.

“We cannot allow ourselves to be pushed around,” said Trump. He said Schumer pushed Bredesen to run to try to get Democrats to take back the Senate. “Your vote in this election will decide which party controls the Senate,” said Trump. He said a Democrat-controlled Senate will always be raising taxes. “They just vote because it’s bad for Trump.” He said Democrats vote just to oppose him.

“They’re going to flood your streets with criminal aliens,” said Trump who added Democrats oppose law enforcement. They want to block judges and weaken the military, Trump conveyed. “We will soon have the strongest military we’ve ever had,” the president said of the military under his administration.

“We are doing things now that nobody believes,” president Trump went on to say, as he listed accomplishments under his administration.