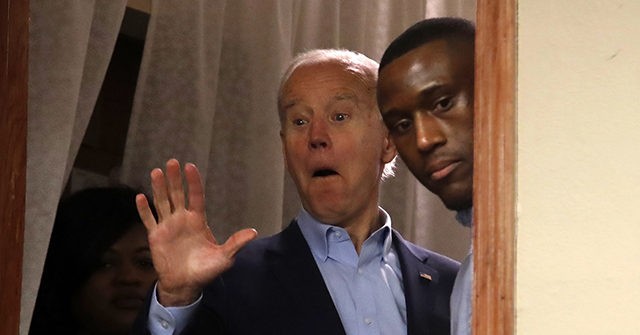 As Breitbart News reported, former Vice President Joe Biden (D) declared Friday morning that if black Americans are unsure whether to support him over President Donald Trump in the November election, “then you ain’t black.” He made the unsolicited, racially-charged remark as he departed his virtual interview with Breakfast Club co-host Charlamagne tha God.

Black authors, activists, pundits, and entertainers — including some Biden supporters — were consistently negative as they reacted over social media. Several described Biden as having a “white savior complex,” “unmitigated gall,” and “audacity” to make this rule for their racial authenticity. Others condemned the comments as “racist” and “disgusting.” Some lamented that Biden is a “demotivating candidate” who has “doomed” the country to another four years of Donald Trump.

Some of the most prominent commentators included Atlantic writer Jemele Hill, former Bernie Sanders campaign spokeswoman Briahna Joy Gray, and Ibram X. Kendi, an influential professor and author known for popularizing critical race theory in works such as How to Be an Antiracist.

im most def voting and it won’t be for that orange man but still don’t tell black voters in their face that they “ain’t black” if they don’t vote for you. pic.twitter.com/RYMWlIDJla

You ain’t black? WTF IS WRONG WITH THIS MAN!!

Biden’s “you ain’t black” comment wasn’t even in response to a question https://t.co/fr16mnNIfn

“If you have a problem figuring out whether you’re for me or Trump, then you ain’t black.” – a white man who created legislation that spurred mass-incarceration in this country.

I think it’s racist (and essentialist) to tie someone’s racial or cultural identity to their politics in any case. I disagree with Black Republicans and think they vote against our broadly shared racial interests, but they’re Black.

So wait…y’all are actually telling me that Former Vice President Joseph Robinette Biden Jr. fixed his lips to say “you ain’t black” if you don’t vote for him in November during an interview on the Breakfast Club? pic.twitter.com/wPrhDSs5mO

thanks for this one, needed that laugh: https://t.co/KalmXMFh2E

We’re doomed. Biden, doing his best to ensure Trump gets another four years.#JoeBiden: ‘If you have a problem figuring out whether you’re for me or Trump, then you ain’t black’ https://t.co/EtJuSAGrgj via @politico #JoeBiden2020 #Biden2020

What’s wild is that Joe Biden had that “You Ain’t Black” line prepared. He pointed and paused like he was doing a commercial. He really thought this slapped 😂😂 pic.twitter.com/I3wu4SPpsZ

The issue wasn’t what Joe Biden said, because it was accurate. The issue was that it came from Biden. It also was clearly a joke that didn’t land. But I’m wondering where all this outrage was yesterday when y’all president declared his public devotion to a Nazi sympathizer.

Bruh…you did good the WHOLE interview then you HAD to do it didn’t you…
Would have been better if you randomly just had hot sauce in your purse!#biden #BreakfastClub

This may the 1st time a candidate had the unmitigated gall tell Black voters out loud “you ain’t Black if you don’t vote for me,” but it’s certainly not a new concept.

But it is about time to dead this forever…

Joe Biden says “If you have a problem figuring out whether you’re for me or Trump, then you ain’t Black”

I still can’t believe this man ended up being the Democratic nominee. Disgusting. pic.twitter.com/1yLcP8ivnP

maybe a minor distinction, but “you ain’t black” wasn’t a response to some question from Charlemagne. He offered it up himself https://t.co/QM38mLPZHN

“If you’ve got a problem figuring out whether you’re for me or for Trump, then you ain’t Black.” – Joe Biden

Whew, I have no words.

And what’s even more disgusting is we know Black people who will support this statement. I worry for us.

Biden is a demotivating candidate.

Biden: “If you have a problem figuring out whether you’re for me or Trump, then you ain’t black.”

Off the top of my head—and again I’m barely awake—but one response might have been who the f—k are you to tell anyone they ain’t Black! Or maybe wtf did you just say to me! Or You got some mf—kin nerve—get this mf—ka off the show. Cut his feed now. 🏾‍♀️

Whoever helped Biden with this particular interview flopped.

“You ain’t black” will never bang coming from a white man’s mouth. Soz.

I know your forefathers decided on the racial categories but you really have a nerve whether in jest or not.

Y’all are so negative! You have to look on the bright side!

For instance, the next time I’m stopped by cops or chased by an armed lynch mob, I’mma just stop and tell them:

“Excuse me, sir. Perhaps you haven’t been informed, but Joe Biden said that I “ain’t black.”