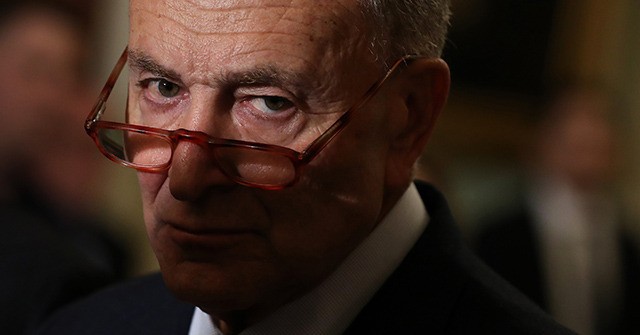 The president and founder of the Coalition of African American Pastors (CAAP) has launched a petition calling on the Senate to censure Sen. Chuck Schumer (D-NY) for his threatening remarks against two Supreme Court justices.

This is the kind of language that promotes violence and hate. We’ve had enough of politicians who bemoan partisanship on the campaign trail while still catering to the most extremist elements of the hard Left. To make an open threat against two sitting judges – in an attempt to influence a case currently before the Court – goes far beyond acceptable behavior for a U.S. Senator.

Last week, during a rally near the Supreme Court where oral arguments were heard regarding a Louisiana abortion safety law, Schumer stated that Gorsuch and Kavanaugh will “pay the price” if they vote against pro-choice advocates in the case.

Over the last three years, women’s reproductive rights have come under attack in a way we haven’t seen in modern history. From Louisiana, to Missouri, to Texas, Republican legislatures are waging a war on women, all women, and they’re taking away fundamental rights.

Schumer’s comments drew a rare rebuke from Supreme Court Chief Justice John Roberts and, on Thursday, a Senate floor speech by Senate Majority Leader Mitch McConnell (R-KY), in which he referred to Schumer’s remarks as “unhinged” and “shameful.”

Senator ⁦@KLoeffler⁩ spoke out in favor of a Senate Republican motion to censure Democratic Leader Chuck Schumer, after the NY senator appeared to threaten Trump-appointed Supreme Court justices during a pro-abortion rally on the high court’s steps. https://t.co/pBPg0rw6Z7

CAAP is now calling on its supporters to request official disciplinary action against Schumer by signing its petition.

Owens added he was “unmoved” by Schumer’s recent apology from the Senate floor, during which he denied threatening the two justices.

“I’m from Brooklyn,” Schumer said. “We speak in strong language.”

“Sen. Schumer is trying to avoid responsibility for his comments by waving them off as ‘political rhetoric,’ but that’s part of the problem,” Owens continued, adding:

Violent threats directed at judges – and that’s what his words plainly were – should not be part of our political discourse. It is this kind of “rhetoric” that encourages radicals to treat political differences as an excuse for violent action. Sen. Schumer must face the consequences for his behavior, which dishonors the Senate and our political system as a whole.

Fox News reported Monday that dozens of prominent conservative leaders released a letter that calls for the Senate to censure Schumer.

“Schumer’s threatening words were unmistakable, unprecedented, and unacceptable,” the letter read and added:

Contrary to what his spokesman later claimed, Schumer’s words were not addressed to Senate Republicans, but to two Supreme Court Justices, by name (sic). Schumer’s threat wasn’t that Republicans would face electoral consequences, but that Justice Gorsuch and Justice Kavanaugh “will pay the price” and “won’t know what hit them.”

On Sunday, the Wall Street Journal editorial board also observed that Schumer, perhaps inadvertently, has “reminded the country of the threat that a Democratic Senate poses to judicial independence”:

Mr. Schumer’s threats were cruder than most, but they are part of a larger Democratic-progressive project to politicize the judiciary and delegitimize the current Supreme Court. The effort has included opposing nearly all of Donald Trump’s judicial nominees, threatening Justices with punishment if they issue certain rulings, stigmatizing judges who belong to the Federalist Society, and even threatening to change the structure of the High Court.

“The Democratic goal here isn’t merely to rebalance the courts with more liberal nominees the democratic way,” said the editorial board. “The goal is to intimidate the judiciary into ruling the way Democrats want—or else.”