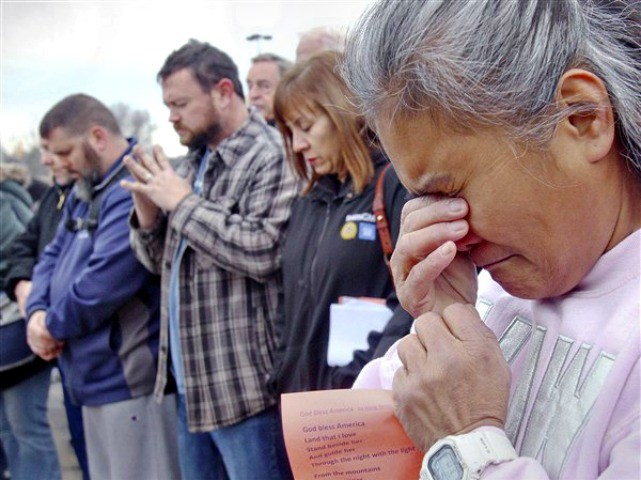 Executives at General Motors (GM) announced Friday that about 4,250 white-collar workers would be laid off, the vast majority of whom are in the United States, as the multinational corporation continues shifting production overseas and to Mexico.

GM executives are set to start the layoffs on Monday of next week,with an investment strategist declaring the day “Black Monday” as thousands of workers in the U.S. and Canada will be terminated from their positions.

“Black Monday at General Motors,” David Kudla wrote online. “To those who are about to separate, we salute you.”

The Monday layoffs of thousands of GM’s white-collar American workers in Michigan and Ohio is just the latest component of the corporation’s laying off of 14,700 workers in North America — including at least 3,300 American factory workers

In 2019, GM expects to stop production at four American plants, including Detroit-Hamtramck and Warren Transmission in Michigan, Lordstown Assembly in Ohio, and Baltimore Operations in Maryland. This comes after GM laid off about 1,500 American workers in Lordstown in 2018, while their Mexico production remained unaffected.

Despite the layoffs, GM’s CEO Mary Barra has continued raking in about $22 million a year.

Breitbart News has learned from insiders that layoffs of American workers are to occur at the Warren Tech Center in Warren, Michigan, the GM plant in Pontiac, Michigan, corporate workers at GM’s Austin, Texas office, as well as layoffs at GM’s Detroit, Michigan Renaissance Center.

“Signs on most of the conference rooms in my building already,” one GM worker in Pontiac, Michigan posted. “The signs all say ‘conference room not available, do not enter’ … looks like [layoffs are] happening Monday.”

Another worker wrote that the layoffs will occur “over in the next 2 weeks.”

“Probably not breaking news, but told by a very reliable source it is going to take place over the next 2 weeks, not on just a single day,” the worker wrote.

At GM’s Austin, Texas office, a worker wrote on the message board that rumors inside the company indicate about “400+ people will be let go in Austin.”

An American worker not being impacted by GM’s mass layoffs wrote a heartfelt note to those who would soon be laid off by the corporation:

We’ve been aware that this was happening, but on Monday it becomes reality. The company will be a very different place after this, at least in my eyes. Just want to say that my heart goes to the ones that are affected, and my hopes are that you all find new jobs, better jobs. It’s been a privilege and a pleasure working with you, and let us hope that no other company will disappoint you the way GM did.

While GM lays off thousands of American workers, it’s production in Mexico and China is ramping up. Specifically, GM is looking to manufacture an electric Cadillac in China and continue manufacturing its Envision compact vehicle in China.

“2019 will be a pivotal year for GM — one in which we will see how a 100-year-old auto company takes drastic steps to convert from (internal combustion) to electric,” Kudla wrote. “It’s a huge bet.”

Offshoring production from the U.S. to Mexico and China has proven cheaper for GM executives. For example, American workers earn $30 an hour, while Mexican workers earn about $3 an hour, a 90 percent cut to wages that widens the corporation’s profit margins.