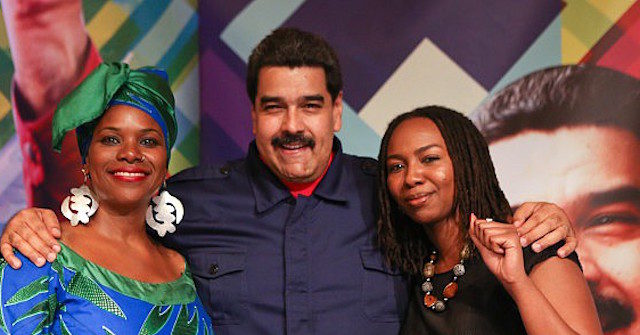 One of the most high-profile founders of the Black Lives Matter organization – now one of the most influential and powerful political movements on the planet – has a long history of supporting Venezuelan socialist dictator Nicolás Maduro.

Maduro has presided over one of the world’s most repressive regimes since 2013 when his predecessor Hugo Chávez died. Under Maduro, Venezuelan police forces have committed a long list of human rights atrocities including the torture, kidnapping, rape, and killing of unarmed protesters. Under Maduro, Venezuela has become an especially dangerous place for minors.

In light of the prominence of Black Lives Matter – a global non-profit currently receiving millions in donations – photos have begun to circulate of Opal Tometi, a founder of the organization, hugging Maduro at the 2015 People of African Descent Leadership Summit in Harlem, New York, where several high-rank officials of the Venezuelan regime also participated. Maduro, currently banned from the United States, was in town for the annual United Nations General Assembly.

Tometi appears alongside Maduro on a Venezuelan government propaganda site’s news report from the event, raising a fist and embracing him. The photo appears to be taken in front of a giant photo of Maduro’s face.

Tometi spoke at the summit, standing in front of a Venezuelan flag for the speech and thanking Maduro’s government for the opportunity. Among her targets during the speech were the government of the Dominican Republic for deporting Haitians and “Western economic policies, land grabs, and neocolonial financial instruments like the World Bank and the International Monetary Fund” for, she argued, creating the Mediterranean migrant crisis.

“I am aware that justice also has to do with racial aspects,” assured Tometi, according to Venezuelan state media. “What we are experiencing is the manifestation of anti-black racism and this is state violence. It must be called by its name. Police brutality, the murders of blacks, violence against the Afro-descendant community, all is proof of the violence of the State,” said the Black Lives Matter founder.

Tometi also quoted Joanne Chesimard, a radical Marxist convicted of murdering a New Jersey state trooper in 1973 who has lived for decades as a fugitive in Cuba, as urging, “you must fight until all black lives matter.” Tometi referred to Chesimard, who renamed herself “Assata Shakur,” as the summit’s “dear exiled sister.”

The Black Lives Matter non-profit identifies Tometi, no stranger to red carpets as a result of her activism, as one of its founders, a “student of liberation theology and her practice is in the tradition of Ella Baker, informed by Stuart Hall, bell hooks and Black Feminist thinkers.” On her own website, Tometi claims to be a “human rights advocate” and pro-immigrant activist.

In addition to meeting with and applauding Maduro at the New York summit, Tometi also served as an election observer in socialist Venezuela during the 2015 legislative elections. She praised the socialist dictatorship as “a place where there is intelligent political discourse” on Twitter during one of the bloodiest years of police brutality in the country.

Doing my duty as a global citizen and serving as an election observer for the national Venezuelan elections. pic.twitter.com/VbryU74jUM

Her praise remains online at press time. Since the election, widespread evidence of fraud on the part of Maduro’s regime during that election has surfaced.

Tometi also applauded Venezuela in an article that year stating, “in these last 17 years, we have witnessed the Bolivarian Revolution champion participatory democracy and construct a fair, transparent election system recognized as among the best in the world.”

Tometi’s ideology does not appear to be an outlier within the Black Lives Matter movement. In a eulogy, the organization mourned the passing of brutal Cuban dictator Fidel Castro in 2016.

“There is an overwhelming sense of loss, complicated by fear and anxiety. Although no leader is without their flaws, we must push back against the rhetoric of the right and come to the defense of El Comandante,” a eulogy by the official “Black Lives Matter” organization read.

After some thoughts on revolution, the piece ends: “As Fidel ascends to the realm of the ancestors, we summon his guidance, strength, and power as we recommit ourselves to the struggle for universal freedom. Fidel Vive!”

Few governments in the Western Hemisphere have engaged in police brutality to the extent that Maduro’s regime has, especially against underprivileged Venezuelans of indigenous and African descent. One year prior to Tometi’s celebratory tweet, Maduro’s regime corps killed 43 protestors and incarcerated over 3,400 during the wave of protests that took over the country demanding Maduro’s ousting.

That same year, the Venezuelan Penal Forum, an NGO, documented 138 cases of torture. One of the most shocking cases was Juan Manuel Carrasco’s, who was raped with a rifle by several Bolivarian National Guard officers. Between Maduro’s rise to power and 2019, he has detained at least 388 political prisoners, including Americans since freed through pressure by President Donald Trump. For comparison, Chávez, who founded the deadly regime, reportedly only held 161 known political prisoners.

Maduro’s totalitarian state particularly harms underaged Venezuelans. Nearly 1,500 minors died in violent circumstances in 2018, most of them at the hands of police or collectives, Maduro’s paramilitaty gangs. Nearly 10,000 died two years prior; in 1997, that number was 440.

Tometi has largely kept silent on Maduro’s police brutality. She did not speak out when Maduro’s colectivos shot 17-year-old Carlos Moreno in the head, or when police shot 14-year-old Kluiverth Roa dead for being near the vicinity of a protest while walking home from school.

The links between Black Lives Matter, the organization, and the Maduro regime are particularly concerning given that White House said last Friday it has information that individuals linked to Maduro have incited violence at protests in the United States spurred by George Floyd’s death, according to an article in the Miami Herald.

Rafael Valera is the Communications Director of the Venezuelan conservative movement Rumbo Libertad.