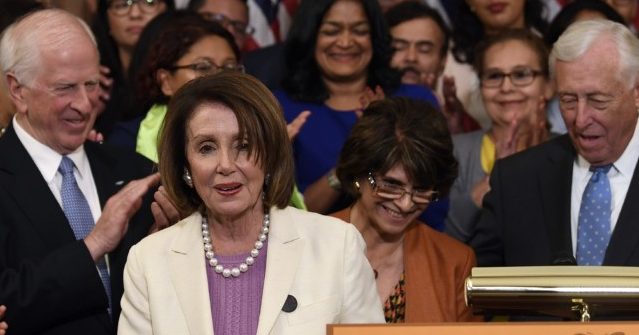 The pro-mass immigration Koch brothers’ network of billionaire, donor-class organizations is readying to financially back Democrats, so long as they promise to support amnesty for illegal aliens and vote to advance free trade at all costs.

In a memo to its staff, the Koch-funded Americans for Prosperity (AFP) organization announced that the economic libertarian group is set to back any elected official in Washington, DC, — including Democrats — who support their agenda of amnesty for illegal aliens and endless free trade, and oppose the GOP voter-preferred economic nationalist agenda of less immigration and tariffs to protect American jobs.

The threat of being primaried prevents policymakers from leading on difficult issues and driving principled policy reforms. AFP or AFP Action will be ready to engage contested U.S. Senate, U.S. House, and state-level primary races, including Republican, Democrat, Independent or otherwise, to support sitting legislators who lead by uniting with others to pass principled policy and get good things done. [Emphasis added]

The Koch effort to financially support pro-amnesty, anti-economic nationalist Democrats would come to fruition through the creation of multiple issue-specific Political Action Committees (PACs), all under the larger Koch network umbrella.

Support for free trade absolutism, amnesty for illegal aliens, and an anti-economic nationalist voting record are basic requirements for Democrats and Republicans who want financial support from the Koch brothers, as outlined in AFP’s memo:

Four new issue specific Political Action Committees (PACs) will be created to make contributions directly to candidates. We know that candidates will seldom agree with Americans for Prosperity on every issue. But for those who do the politically difficult job of leading on a critical issue, these issue specific PACs will make it clear why millions of Americans support them on that issue, even if they have principled disagreements on others. The PACs, which will launch in the coming weeks as new entities working with our broader community, are: Uniting for Economic Opportunity, Uniting for Free Expression, Uniting for Free Trade, and Uniting for Immigration Reform. [Emphasis added]

The initiative is set to put the Koch brothers’ network of donor class organizations in line with Democrats such as Joe Biden — who has backed amnesty for all illegal aliens and continues to support the NAFTA free trade deal that eliminated nearly five million American jobs — and Republicans such as Justin Amash who opposes the use of tariffs and has previously suggested support for an amnesty for illegal aliens shielded from deportation by President Obama’s Deferred Action for Childhood Arrivals (DACA) program.

Meanwhile, the Kochs’ doubling down on amnesty and free trade puts them not only at odds with economic nationalists such as President Donald Trump and Sen. Elizabeth Warren (D-MA) — both of whom support tariffs on foreign imports and cracking down on multinational corporations who outsource U.S. jobs — but also with the overwhelming majority of Republican voters, conservatives, and Trump supporters.

On immigration, the billionaire donor class continues to be out of step with Republican voters.

While the Koch brothers, U.S. Chamber of Commerce, corporate CEOs, and Silicon Valley elites have continuously demanded amnesty for illegal aliens and increased levels of legal immigration, Republican voters have said their top priorities are building a wall along the U.S.-Mexico border to stop illegal immigration and reducing all legal immigration to the country.

Still one of the most telling charts of voter-profiles from recent election. The results: There is no support for economic libertarianism across U.S. Source: https://t.co/u5u99K1nW1 pic.twitter.com/TfenFo8FZa

Previously, the Kochs and their network have opposed any reductions to legal immigration to raise American workers’ wages, reforms to save U.S. taxpayers billions of dollars by ending welfare-dependent legal immigration, and an end to the country’s birthright citizenship policy that rewards illegal aliens’ U.S.-born children with American citizenship.

The nation’s Washington, DC-imposed mass legal and illegal immigration policy — whereby at least 1.5 million unskilled foreign nationals are admitted to the U.S. every year — is a boon to corporate executives, Wall Street, big business, and multinational conglomerates, as America’s working and middle class have their wealth redistributed to the country’s top earners through wage stagnation.

Research by the National Academies of Sciences, Engineering, and Medicine has discovered that immigration to the country shifts about $500 billion in wages away from working and middle-class Americans toward new arrivals and economic elites.

Meanwhile, decades of free trade has spurred mass layoffs, unemployment, and offshoring of high-paying American jobs while surging trade deficits. Since China entered the World Trade Organization (WTO), the U.S. trade deficit with China has eliminated at least 3.5 million American jobs from the American economy. Millions of American workers in all 50 states have been displaced from their jobs, which have been lost due to U.S.-China trade relations.