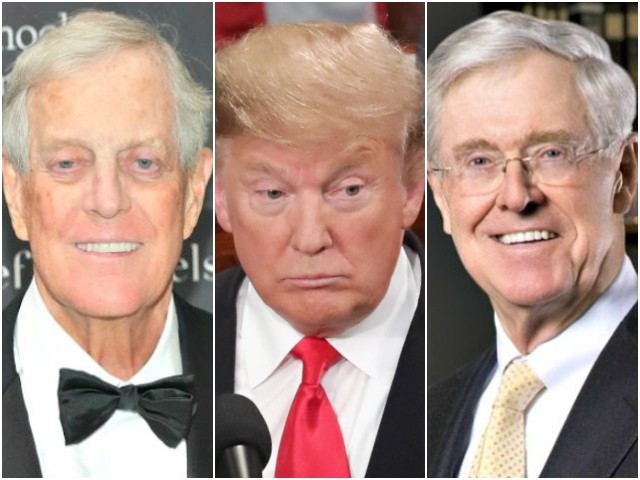 As Breitbart News reported, Trump broke from his 2015, 2016, and 2017 “America First” commitment to reduce overall legal immigration levels to raise the wages of America’s working and middle class this week when he doubled down on a call for increasing legal immigration.

“We need people in our country because our unemployment numbers are so low and we have massive numbers of companies coming back into our country,” Trump reportedly told the media this week.

“I need people coming in because we need people to run the factories and plants and companies that are moving back in,” Trump said. “We need people.”

Now, the pro-mass immigration and economic libertarian Koch network is praising Trump’s statements endorsing more legal immigration beyond the already 1.2 million legal immigrants that are admitted to the country every year, depressing the wages and job prospects of American workers.

Daniel Garza of the Koch-backed Libre Initiative said the path forward for expanding legal immigration levels is first passing an amnesty for millions of illegal aliens:

But while we stand ready to work with anyone to reform our legal immigration system, and to ensure that market-driven policies effectively reduce the incentives that drive people to violate the law, the path forward today remains unchanged. The best way for the president and leaders in Congress to address two important priorities and avoid another shutdown is to pass legislation that pairs enhanced funding for border security and permanent protection for the Dreamers. We will continue to work with the White House and leaders in Congress to get this done. [Emphasis added]

The Kochs and their network of donors have opposed any reductions to legal immigration to raise American workers’ wages; reforms to save U.S. taxpayers billions by ending welfare-dependent legal immigration; and an end to the country’s birthright citizenship policy that rewards illegal aliens’ U.S.-born children with American citizenship.

The Washington, DC-imposed mass legal immigration policy is a boon to corporate executives, Wall Street, big business, and multinational conglomerates, as America’s working and middle class have their wealth redistributed to the country’s top earners through wage stagnation.

Business lobby claims there’s a labor shortage. The 6.8 percent of black Americans who are unemployed (double the national rate) would disagree. https://t.co/jZ4dazoGjX

Every one percent increase in the immigrant composition of an American workers’ occupation reduces their weekly wages by about 0.5 percent, researcher Steven Camarotta concludes. This means the average native-born American worker today has their wage reduced by perhaps 8.5 percent because of current legal immigration levels.

Likewise, every one percent increase in the immigrant composition of low-skilled U.S. occupations reduces wages by about 0.8 percent. Should 15 percent of low-skilled jobs be held by foreign-born workers, it would reduce the wages of native-born American workers by perhaps 12 percent.

Currently, the U.S. imports more than a million legal immigrants annually, with the vast majority deriving from chain migration, whereby newly naturalized citizens can bring an unlimited number of foreign relatives to the country. In 2017, the foreign-born population reached a record high of 44.5 million.

The U.S. is on track to import about 15 million new foreign-born voters in the next two decades should current legal immigration levels continue. Those 15 million new foreign-born voters include about eight million who will arrive in the country through chain migration. This booming legal immigrant population has not only rapidly shifted the demographics of the nation, but research indicates it will hand over all electoral dominance to Democrats in a matter of decades.