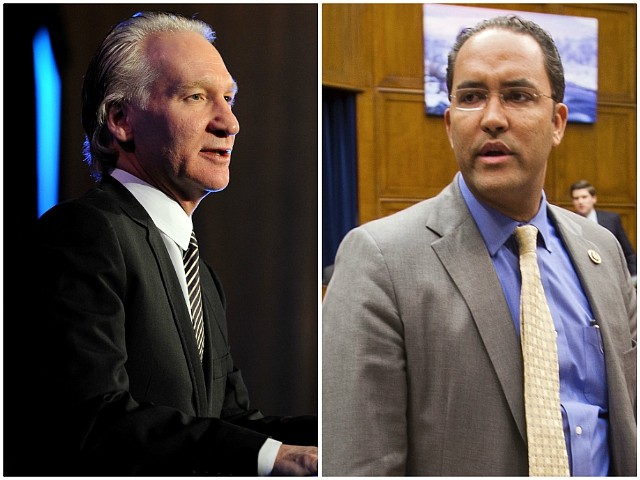 Leftist comedian and HBO host Bill Maher is once again facing a barrage of criticism after making a racist joke to Rep. Will Hurd (R-TX) about black people and fried chicken.

The Texas Republican appeared on the Real Time on Friday evening to discuss the ongoing battle over the construction a wall on the southern border, an idea he opposes, leading Maher to ask why he continues to side with the “traitor” President Trump.

“I’m a Republican because I believe in limited government,” Hurd explained.

“I’m just asking why you’re Republican? Because they’re not good at the debt, that was their big thing. You said limited government, they don’t do that,” Maher contested “What’s in it for you? What is in the Republican Party for you? You were in the CIA!”

“I was in the CIA for almost a decade. I was the dude in the back alleys at four o’clock in the morning collecting intelligence on threats to the homeland.”

“That’s where you’d collect it, huh?” Maher responded. “Wow. By the Popeyes Chicken?”

Video: Here’s Bill Maher lobbing a clearly racist joke to GOP Congressman Will Hurd, asking him if he gathered undercover intel for the CIA out “by the Popeye’s Chicken.” pic.twitter.com/gxwNZQKyAL

The joke was a reference to an old stereotype that black people always eat fried chicken, given that it was a staple of the southern diets dating back to the years of slavery. As a result, the remark immediately drew anger from figures across social media, some of whom even called on Maher to quit the HBO late-night how.

Bill Maher insults black CIA vet by suggesting he picked up tips “behind the Popeye’s Chicken” same day as Ralph Northam admits he submitted racist af blackface Klan photo to yearbook – it’s almost like this is all a game to them.

Why is the Left so racist? pic.twitter.com/wPEksol5Nf

Bill Maher insults black CIA vet by suggesting he picked up tips “behind the Popeye’s Chicken” same day as Ralph Northam admits he submitted racist af blackface Klan photo to yearbook – it’s almost like this is all a game to them.

Maher really thinks because he has a fetish for Black women that he is an honorary Black person. @billmaher: No matter how many women you objectify and sleep with, you are not one of us. You are a racist who for some reason keeps getting a pass for your behavior. https://t.co/FnoA3sEWCN

On the same day a racist yearbook photo of Governor Northam is unearthed, Bill Maher makes a reference to “Popeye’s chicken” in criticism of a black politician and former CIA agent being Republican.

The left sure does have a shitty way of kicking off #BlackHistoryMonth⁠.

I’m guessing he’ll pull out after Maher’s (latest!) racist joke, but smart people shouldn’t plan to go there in the first place. Bill Maher is a bigot and a pig. the slower you are to admit that, the dumber you’re gonna look

It is not the first time that Maher has attracted criticism for his use of racially charged language. In June 2017, Maher joked that he was a “house nigga” during a conversation with Sen. Ben Sasse (R-NE), after he suggested that Maher spend time working in the fields of Nebraska.

Maher later apologized for the remark, describing it as “inexcusable and tasteless.” Both Maher and Hurt are yet to comment on the latest controversy.