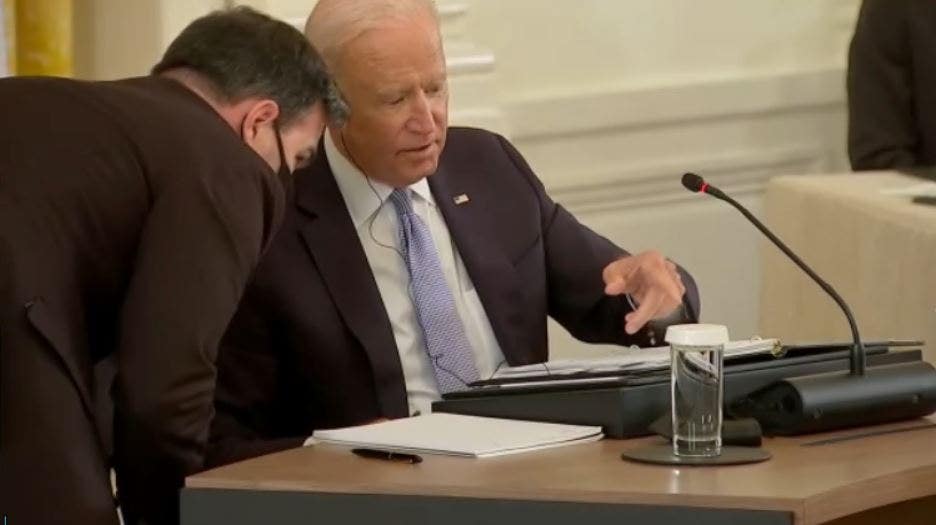 President Joe Biden appeared to suffer a technology malfunction during a United Nations session in which the four world leaders of the Quadrilateral Security Dialogue, or Quad, met to discuss coronavirus vaccines, trade and relations between the nations.

As Japanese Prime Minister Yoshihide Suga finished speaking about the importance of cooperating on scientific advances and asking the United States to reduce restrictions on importation of Japanese rice, Biden took out a pen and began writing on a pad; checking his watch, before subtly motioning across the room as Suga finished.

The Delaware Democrat then grasped a small cord connecting his earpiece to the translator console.

An aide walked behind the president, who leaned in and said, “I can’t get this to function at all,”

The aide appeared to fiddle with a knob on the translator console, check the earpiece itself, and walk out of frame as video of the summit concluded.

The Quad had existed in practice since 2004 – following a catastrophic tsunami in Japan – but had never met in its latest iteration on a prime minister/president level until March, according to Australian Broadcasting.

According to the Center for Strategic and International Studies, the Quad essentially went on hiatus for several years after then-Australian Prime Minister Kevin Rudd backed out of the discussions, saying it would not meet Canberra’s strategic concerns.

At Friday’s meeting, Modi said a Quad vaccine initiative would greatly help the Indo-Pacific region, while Biden claimed the group has been “making progress” on its initiatives in the time since their March meeting, while Morrison spoke about the Quad’s shared values.

Secretary of State Antony Blinken was also seen accompanying Biden at the meeting.