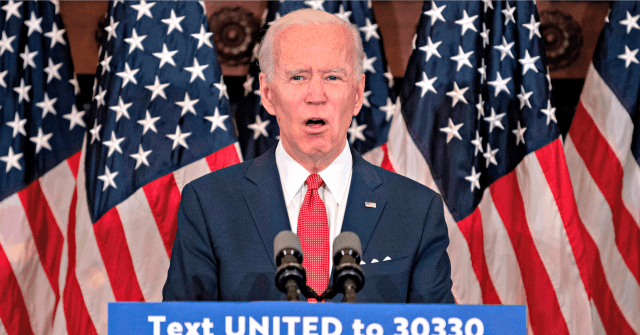 The top contenders to be former Vice President Joe Biden’s running mate continue to be bogged down by past issues and local scandals.

Biden, who has promised to make history by picking a woman as his vice presidential nominee, has stoked speculation on the topic in recent weeks. First, the presumptive nominee asserted that whomever he chose would have to be “ready to be president on a moment’s notice.” Then, Biden followed up by having allies hint publicly at the women on his shortlist, before finally announcing that a decision would be unveiled by August.

“We’re in the process of deciding the basic cut, about whether or not they really want it. Are they comfortable? They’ve asked a lot of questions,” the former vice president told donors.

The reality, however, is more complicated. Instead of having a deep bench of qualified candidates, Biden is stuck without many high-profile choices that can unite the Democrats heading into November.

Over the weekend, Demings,  who has catapulted to the front of the Biden’s short-list amid the protests over George Floyd’s death, came under fire for her prior record as the police chief of Orlando, Florida. Demings, now a prominent member of the Congressional Black Caucus, oversaw the city’s police department from 2007 to 2011. At the time, the department was dogged by accusations of police brutality and excessive use of force.

As the Orlando Sentinel reported last week, Demings’ tenure saw officers use force when arresting suspects at more than double the rate of other law enforcement agencies across Florida.

Although Demings can point to the fact that violent crime decreased by 40 percent while she oversaw the Orlando police department, many within the Democrat camp fear her time as police chief will boil down to one incident in particular. In September 2010, just as Demings was approaching her three-year mark on the job, one of her officers was accused of throwing an 84-year-old World War II veteran, Daniel Daley, to the ground.

The altercation occurred as Daley, who some at the scene claimed was inebriated, became upset with the officer, Travis Lamont, after his car was towed. In the heat of the moment, Daley reportedly touched Lamont’s shoulder, resulting in the officer throwing him over his shoulder onto the ground. Daley sustained a broken neck because of the incident and filed a lawsuit alleging excessive force.

For many Democrats, the story is all too reminiscent of a recent police encounter in Buffalo, New York, that has received national headlines. Last week, two officers from the Buffalo police department were caught on video pushing a 75-year-old protester to the ground as they attempted clear a public square.

In the video, the elderly protester is seen losing his balance after being pushed, resulting in a fall that appeared to crack his head. The officers, members of Buffalo’s emergency response team, continued clearing the square with their colleagues as the protester lay bleeding on the ground. They were later arrested and charged with assault.

The incident sparked condemnation from across the country, but from nowhere more loudly than the young progressive activists, many of them people of color, that powered Sen. Bernie Sanders (I-VT) failed presidential campaign. Given that this significant constituency has proven unenthusiastic about Biden, some believe that Demings and her law enforcement record will do little to unite Democrats should she be tapped for the ticket.

Demings, herself, seems to agree, moving to downplay and clarify her tenure in Orlando. Even before the video from Buffalo went viral, the Florida congresswoman penned an op-ed in The Washington Post urging her “brother and sisters in blue” to not only push for more accountability in policing, but also “think before you act!” Demings wrote:

When an officer engages in stupid, heartless and reckless behavior, their actions can either take a life or change a life forever. Bad decisions can bring irrevocable harm to the profession and tear down the relationships and trust between the police and the communities they serve.

On Sunday, Demings went a step furthe,r telling ABC’s This Week that the most vital thing she brought to the Orlando police department as its chief was a “social worker’s heart.”

It remains unclear, though, if the strategy will work for Demings, especially as many younger Democrats are eager to see real and immediate change result from the Floyd protests.

Moreover, the risks associated with pick Demings for Biden underscore the predicament the former vice president finds himself in as he begins to weigh choices for a running mate. Like Demings, most of the women tipped as being on Biden’s short-list pose significant risks for the Democrat ticket.

Klobuchar, the former vice president’s onetime rival for the Democrat nomination, has drawn the most attention in recent weeks. Not only have Biden’s allies begun touting the Minnesota Democrat for the number two spot, but the campaign has confirmed they are vetting her for the position.

Klobuchar’s rise in the vice-presidential sweepstakes has not gone smoothly with social justice activists. As in Demings’ case, many believe the senator’s record on criminal justice issues, most prominently as a local county prosecutor, will fail to appeal to younger voters of color.

“Her campaign appeal was about bringing in working-class, white people from the Midwest, and perhaps that’s true, but that’s a particular strategy that doesn’t align with what it’s going to take to win,” LaTosha Brown, a co-founder of Black Voters Matter, told Politico recently, noting that it was pivotal for Democrats to “excite the base.”

Klobuchar’s standing diminished further this month when it emerged that, during her time as prosecutor, her office had not charged Derek Chauvin, the police officer accused of killing Floyd, for his role in the shooting death of another Minneapolis man.

The senator has denied that her office could have charged Chauvin, because the investigation into the shooting was still ongoing when she ascended to the United States Senate, but the damage appears to be done. Last week, House Majority Whip Jim Clyburn (D-SC), a top Biden surrogate, signaled it was “very tough timing” for her to be tapped for the ticket.

Similar to Klobuchar and Demmings, Harris, another onetime rival on Biden’s shortlist, is also facing backlash for her criminal justice record.

Harris, in particular, has engendered criticism from activists for her tough on crime positioning as California’s attorney general between 2011 and 2016. Most notably, Harris was a firm opponent of marijuana legalization as attorney general, dating as late as 2014, and she prosecuted more than 1900 people for possession of the drug.

Despite the controversial history, Harris is still seen as more of a likely running mate for Biden, especially given her fundraising prowess, a skill the former vice president did not exhibit during the Democrat primaries. The fact, though, that her ascendance could be blocked because of her prior law and order posturing, indicates just how much of a vulnerability the issue poses for Democrats, especially given Biden’s authorship of the 1994 crime bill.

Abrams, who lost a close race for governor of Georgia in 2018, has long been viewed as a potential running mate for Biden. The Georgia Democrat, however, brings a dearth of experience to the position, having only served as the minority leader of her state’s house of representatives before mounting a run for the governor’s chair.

Since losing that race, Abrams has revamped her voter registration groups to focus on flipping Georgia blue in 2020. Those efforts, however, have not been without controversy. The Georgia ethics commission has an open investigation into both groups to see if they have violated state campaign finance laws by aiding Abrams’ 2018 gubernatorial run.

Whitmer, who has been dinged by many in the media for openly jockeying for the position, is facing controversy over her handling of the coronavirus pandemic. Specifically, the governor’s decision to extend the state’s stay-at-home order in May elicited protests from large portions of her constituents.

The situation only got worse after it emerged that Whitmer’s husband tried to use his status as the first gentleman of Michigan to retrieve his boat ahead of Memorial Day. The attempt, which the first couple claim was a joke gone awry, came as the governor was championing strict restrictions on boating and other outdoor activities to limit the likelihood of coronavirus transmission.

Since the story went public, nearly all talk of Whitmer being Biden’s vice presidential nominee has faded.

Another female governor,  Lujan Grisham of New Mexico, has similarly appeared to drop out of contention after purchasing jewelry from a store she had ordered closed due to public health concerns over COVID19.

Although Lujan Grisham’s office claimed the purchase did not violate New Mexico’s lockdown order, it still sparked outrage and claims of hypocrisy.

Warren, who vyed against Biden for the nomination throughout the Democrat primaries, is seen as a unity candidate that can bridge the Sanders wing of the party with its establishment counterpart.

Although she has expressed interest in the vice presidency as of recent dates, there is fear among some of Biden’s allies that Warren does nothing to help energize turnout among black voters. Warren, a former Harvard professor, struggled to connect with black voters on the campaign trail, despite generally positive notes from racial justice groups.

Some Democrat strategists worry that without an African American woman on the ticket, Biden is doomed to lose in 2020. In making the argument, many point to the drop-off in black turnout between 2012 and 2016 as the primary reason for why former Secretary of State Hillary Clinton lost.

During that race, Clinton received 88 percent of the black vote, according to exit polls. Although impressive, the numbers were significantly lower than the 93 percent former President Barack Obama garnered on his way to reelection in 2012. The drop-off was most significant in Michigan, Pennsylvania, and Wisconsin—states that went narrowly for Trump in that election after having backed Democrats at the presidential level for nearly three decades.