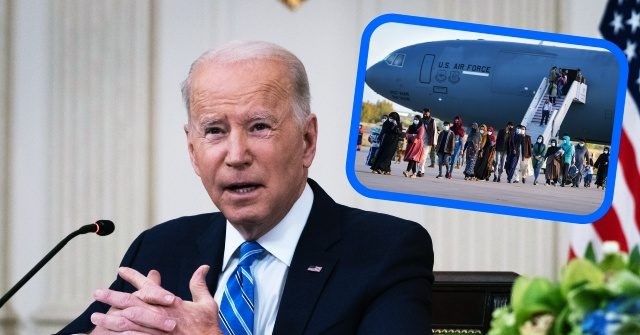 President Joe Biden is considering a plan that would fast-track thousands of Afghans into the United States to eventually secure green cards for them.

As Breitbart News has chronicled, more than 75,000 Afghans have been brought to the U.S. since mid-August as part of Biden’s massive resettlement operation — the largest in American history. Top administration officials have conceded that minimal vetting has been conducted.

Now, in a plan to quickly bring about 2,000 Afghans to the U.S. every month, Biden is looking to fast-track the refugee resettlement by skimming it down to a 30-days-or-less screening and vetting process.

The goal, Axios reports, is to secure green cards for future Afghan arrivals:

President Biden’s advisers are crafting a plan to accelerate bringing potentially thousands of Afghans to the U.S. from Qatar, according to a source with direct knowledge of the administration’s internal deliberations on the subject. [Emphasis added]

It would allow Afghans to be screened, vetted, approved for refugee status and placed on planes to the United States within 30 days of their arrival at the military site in Qatar being used to house them. [Emphasis added]

Using an expedited U.S. Refugee Admissions Program process in Qatar, though, would immediately put Afghans on a pathway to green cards. [Emphasis added]

Biden’s continuing unlimited flow of Afghans to the U.S. was first authorized by 49 House and Senate Republicans who joined Democrats in September 2021 to fund the resettlement to the sum of $6.4 billion. Then, in December 2021, 20 House and Senate Republicans helped Democrats pass an additional $7 billion in funds to ramp up the endless Afghan migration.

Refugee contractors, the non-governmental organizations (NGOs) that rely on American taxpayer money to resettle refugees across the U.S. annually, secured billions as a result of the funding measures.

The Biden administration, Axios reports, is looking to former President Obama’s controversial refugee resettlement out of Syria where thousands were quickly flown to the U.S. under vetting protocols that were repeatedly called into question.

Every five years, refugee resettlement costs taxpayers nearly $9 billion. Over the course of a lifetime, taxpayers pay about $133,000 per refugee and within five years of resettlement, roughly 16 percent will need taxpayer-funded housing assistance.

Over the last 20 years, nearly a million refugees have been resettled in the nation — more than double that of residents living in Miami, Florida, and it would be the equivalent of annually adding the population of Pensacola, Florida.