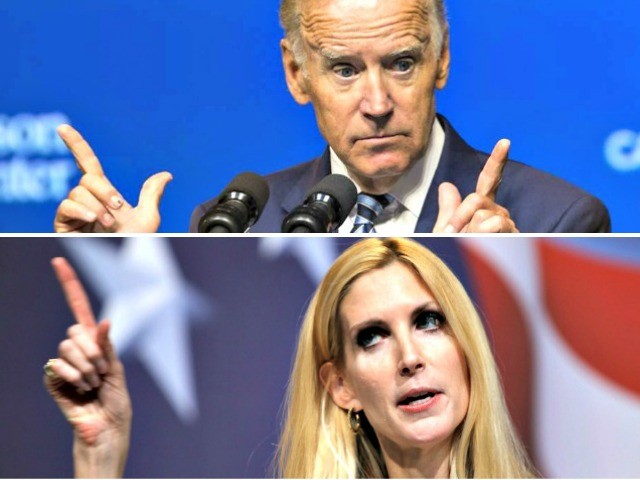 “Republicans overwhelmingly voted to keep the government open. Then Rush Limbaugh and the conservative blonde woman says he’s losing his base, and so he’s changed his mind,” Biden, who is said to be mulling a White House run in 2020, said of President Trump’s pledge to secure funding to build a wall along the U.S.-Mexico border.

Joe Biden: “Republicans overwhelmingly voted to keep the government open. Then Rush Limbaugh and the conservative blonde woman says he’s losing his base, and so he’s changed his mind.” Via CNN pic.twitter.com/5qTS88l5I6

Biden’s eyebrow-raising remark comes after Coulter predicted that President Trump will “fold” on his chief campaign promise to fund the wall, despite expressing to Democrat leaders a willingness to keep the government closed until an agreement is reached on the proposal. “For one thing, he actually did shut down the government — though don’t worry, he’ll fold in the end,” Coulter told New York radio host Mark Simone.

Before the shutdown, Limbaugh, an ardent supporter of President Trump’s immigration policies, said on his nationally syndicated radio program that the president promised him he would veto any spending bill without funding for the wall.

Meanwhile, White House officials and congressional aides held talks to reopen the government without a breakthrough Saturday, though they plan to return to the table on Sunday.

Following the meeting, President Donald Trump tweeted: “Not much headway made today,” later saying that he plans to go to his retreat at Camp David, Maryland, on Sunday morning to discuss border security and other topics with senior staff.

Democrats agreed there had been little movement Saturday, saying the White House did not budge on the president’s key demand, $5.6 billion to build a border wall.

The White House said funding was not discussed in-depth, but the administration was clear they needed funding for a wall and that they wanted to resolve the shutdown all at once.

With talks stalled, House Speaker Nancy Pelosi announced that House Democrats plan to start approving individual bills to reopen shuttered departments starting with Treasury. In an interview with NBC’s Meet the Press, set to air Sunday, Acting Chief of Staff Mick Mulvaney reiterated that the administration was willing to cut a deal with the Democrats, stating President Trump is willing to forgo a concrete wall for steel or other materials.

“If he has to give up a concrete wall, replace it with a steel fence in order to do that so that Democrats can say, ‘See? He’s not building a wall anymore,’ that should help us move in the right direction,” Mulvaney told host Chuck Todd.