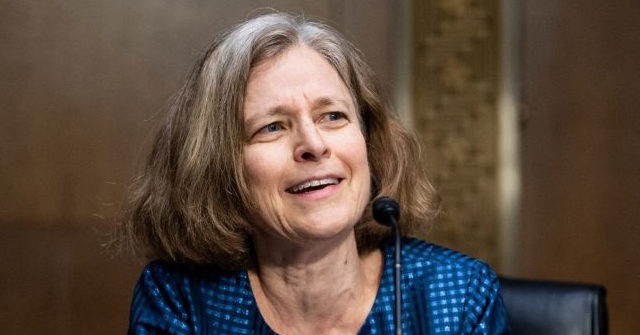 Sarah Bloom Raskin, one of President Joe Biden’s nominees to serve on the Federal Reserve board of governors, could not recall or was not aware of how an answer more than 35 questions from Sen. Pat Toomey (R-PA).

Raskin, whom Biden tapped to serve as the Fed vice chair of supervision, faced intense scrutiny last week during her confirmation hearing at the Senate Banking Committee.

Sen. Cynthia Lummis (R-WY) roasted Raskin over how she may have used her influence as a former Fed governor to secure a lucrative financial tool for her company. Rep. Jamie Raskin (D-MD), Raskin’s husband, also allegedly violated the Stop Trading on Congressional Knowledge (STOCK) Act by failing to disclose his wife’s $1.5 million stock payout.

Raskin has also faced criticism for advocating to use the Fed to advance a climate change agenda.

“Sarah Bloom Raskin, President Joe Biden’s latest Federal Reserve nominee, is a revolving-door lobbyist who used her access to get special treatment from the Fed for a company on whose board she sat. She thus made more than a million dollars for herself,” Tim Carney of the Washington Examiner wrote Tuesday.

In response to Toomey, the Senate Banking Committee ranking member, Raskin appeared to suffer amnesia, either saying she could not recall or was not aware of the situation.

Amanda Thompson, a spokesperson for the Banking Committee Republicans, accused Raskin of failing to be honest with the committee.

“Ms. Raskin is either suffering from the greatest case of selective amnesia since the FBI interviewed Hillary Clinton about her email server, or she is lacking candor with Congress because she knows this was a dirty use of Washington’s revolving door,” Thompson said. “Even though Ms. Raskin claims not to recall whether she lobbied the Fed on behalf of Reserve Trust, she asserts, without any sense of irony, that if she did do it, it was done so ethically and entirely above board.”

In response to questions about her potential abuse as a former Fed governor to influence the Fed to grant Reserve Trust a master account at the Fed, she only gave a generic response.

This could be similarly compared to how former Secretary of State Hillary Clinton “couldn’t recall” the answer more than three dozen times when questioned by the FBI.