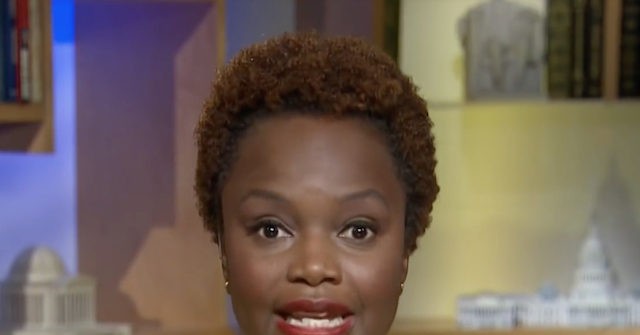 Sunday on MSNBC, presumptive Democratic Party nominee Joe Biden’s senior campaign advisor Karine Jean-Pierre said racism was increasing under the leadership of President Donald Trump, which is putting the lives of people of color at risk.

Jean-Pierre said, “I want to go back to why we’re having this moment right now. We have to remember that George Floyd’s death was so heinous, not just people in the country saw it, but people around the world saw it. And we watched a white police officer put his knee on the neck of George’s there, and he was pleading for breath, and one of the last words that he said was ‘I can’t breathe’ while his body was going limp. And we have to remember that people are in pain. The black community is in pain because his life was so devalued because that is not a one-off. This is something that has occurred over and over and over again. Vice President Biden, in his remarks on Friday, said something that resonated with me as a black woman, as a black mother, which is this is one of the country’s original sin. And he also said that leadership needs to come to the table to deal with uprooting racial inequality. And this is where we are. This is the moment that we’re in. We have to talk about this. And we have, like Joy said, put policies out there that really address this. And we need new leadership.”

She added, “We have a president right now who is in the White House who is doing what he normally does, what he has been for the last four years which is incite violence and divide us and it has put the lives of people of color, lives of black people at risk. That language. Here is the thing we’ve seen studies, racism has gotten worse on Donald Trump. So we have to turn this around. We have to come out in November. We have to change leadership. Not just at the top but up and down the ballot.”