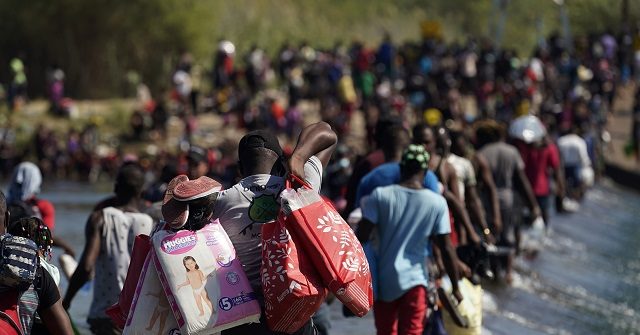 The Biden Administration stated on Saturday that “our borders are not open.” The statement comes as the number of mostly Haitian migrants being detained after freely crossing the border from Mexico rose to more than 14,000.

“The Biden Administration has reiterated that our borders are not open, and people should not make the dangerous journey,” according to a statement from U.S. Department of Homeland Security officials on Saturday morning. The comments come as part of a six-point plan to “address the increase in migrants in Del Rio.”

The statement comes as Fox News journalist Bill Melugin tweeted a new video showing hundreds of mostly Haitian migrants pouring across the border that Biden officials say is not open.

BREAKING: I am absolutely stunned by what I’m witnessing right now. We are on a boat in the Rio Grande near the Del Rio international bridge and we are watching as masses of hundreds of migrants walk across the river from Mexico and stream into the US illegally. @FoxNews pic.twitter.com/xXE4pDkpIe

Melugin also tweeted photos showing Del Rio residents gathering to protest the Biden administration’s failure to address the “deteriorating situation at the international bridge in Del Rio.” He stated that there are now more than 14,000 migrants being held under the bridge.

NEW: Del Rio residents are gathering to protest the Biden administration over the deteriorating situation at the international bridge in Del Rio. Hearing from source the number of migrants under the bridge has now swelled to over 14,000. Del Rio population is 35,000. @FoxNews pic.twitter.com/3gsrHp5DPL