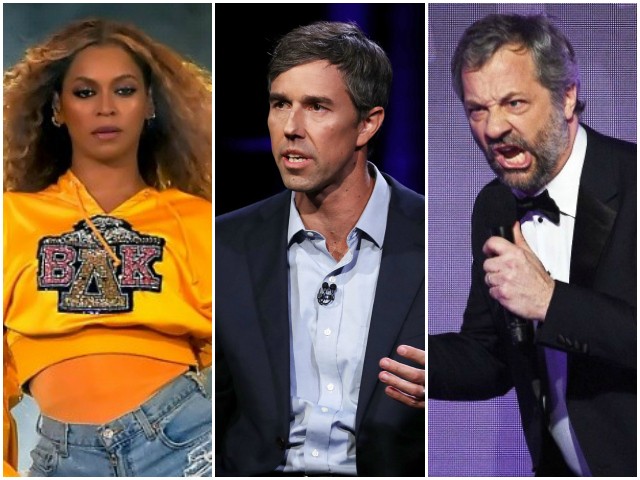 Hollywood celebrities from Beyoncé to Rosie O’Donnell poured their support into the campaign of Texas Democrat Beto O’Rourke who challenged Texas Republican Ted Cruz–but it wasn’t enough to convince Texans.

Despite an enormous amount of attention from celebrities, Beto O’Rourke was still defeated by incumbent Sen. Ted Cruz Tuesday.

“I’m feeling grateful for everyone before me who fought so hard to give us all the right to have a voice. We can’t voice our frustrations and complain about what’s wrong without voting and exercising our power to make it right. We need you,” she wrote in an Instagram post with a photo of her wearing a “Beto” hat.

“We all need each other, because when we are truly united we are unstoppable. Sending you all love and positivity on this happy voting day! Every vote counts Every race matters Everywhere,” she wrote.

More than just moral support, Hollywood celebrities brought in cash–lots of it.

TMZ reported last week that according to Federal Election Commission (FEC) filings, “Sarah Jessica Parker, Jimmy Kimmel and Rosie O’Donnell have each thrown down $2,700 … while Chelsea Handler plunked down $2,500 and Chris Rock has tossed in $1,000.”

O’Donnell previously said that O’Rourke was “gonna beat Ted Cruz,” a prediction that did not come true.

These numbers come after earlier reports from last summer showed that even more cash was flowing into the race from out of state.

“This race is so tight, that Cruz had to ask his former arch enemy Donald Trump for a boost, and the President lend a tiny hand at a rally for Ted Cruz in Houston tonight. That had to be the saddest phone call Ted Cruz ever had to make,” Kimmel said. “I mean, imagine if your neighbor insulted your wife’s face, and then you had to ask him to loan you a weed whacker. That’s like, that’s Ted Cruz’s life right now.”

Kimmel also said, “Imagine how hilarious it will be if Ted Cruz is forced to kiss his bully’s ass in front of the whole world, and then loses anyway. Come on, I mean, if nothing else, do it for comedy’s sake.”

“He supports us. He supports health care for all. He’s going to fight for our kids’ future and invest in our public school systems so that every kid can succeed,” she added.

Despite all this Hollywood noise around O’Rourke, he came up short in his own state.