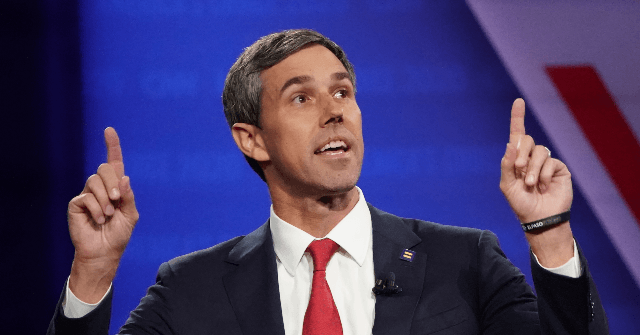 Former Texas Rep. Beto O’Rourke’s (D) campaign announced $4.5 million raised in the third quarter, but it admitted that it is not enough, touting a “no-bullshit path for Beto” moving forward.

O’Rourke’s campaign announced on Friday $4.5 million raised in the third quarter, putting him near the bottom of the barrel compared to his Democrat challengers. According to the campaign, 99 percent of O’Rourke’s donations were below $200, and the average donation was $26.

They came from all 50 states, and nearly 20% of our donors gave to us for the first time this quarter. And most impressively, we did this while not fundraising during the 12 day period around the El Paso shooting because that tragedy wasn’t about our campaign, it was about our community.

However, O’Rourke’s team admitted that the amount raised is “not what we thought we’d be able to do given all of the other indicators we’re seeing.”

“Voters like what Beto has to say. When they meet him in person, they like him even more. In fact, our modeling shows a correlation between the counties Beto visits and an increase in his favorability,” his campaign argued.

The campaign diagnosed the problem, writing, “People think this is a two-person race.”

“We’re stuck in what we’ve been calling the ‘Media Trap,’ where the media is treating this race like it’s over, despite the fact that only 9% of voters have made up their mind,” it claimed, adding that it sees a “no-bullshit path for Beto.”

“We see a no-bullshit path for Beto and for our people-powered campaign—and a real, serious one,” his campaign wrote. “More than that, though, we see that we need to bypass the media trap and we need to do it quickly.”

The campaign outlined a few of the things that need to happen to help O’Rourke break through. The plan includes launching an advertising blitz, beefing up national organizers, and focusing on early primary states.

O’Rourke’s third-quarter haul pales in comparison to his competitors’ numbers: