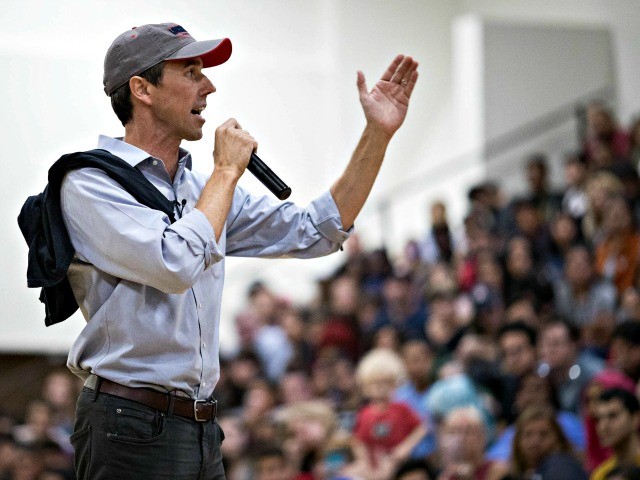 Beto O’Rourke supports the “concept” of a Green New Deal, a proposed economic stimulus program designed to transition the U.S. from fossil fuels to 100 percent renewable energy within a decade, joining other potential 2020 presidential candidates in backing the initiative.

Chris Evans, a spokesman for O’Rourke, told HuffPost Friday that the former Texas congressman is “supportive of the concept” of a Green New Deal and its focus on “green job” creation.

“[He] is looking forward to engaging more on the issue as it continues to develop,” Evans said in a statement emailed to the left-wing news outlet. “As he mentioned while traveling to every county across Texas during his senate campaign, he’s proud to come from a renewable energy producing state that is number one in wind power production, number one in wind power jobs and number one in solar energy potential.”

News of O’Rourke’s support for the Green New Deal comes after Sen. Elizabeth Warren (D-MA), who launched her presidential exploratory committee this week, came out in favor of the proposal. “Senator Warren has been a longtime advocate of aggressively addressing climate change and shifting toward renewables, and supports the idea of a Green New Deal to ambitiously tackle our climate crisis, economic inequality, and racial injustice,” an aide for the Massachusetts Democrat told Axios Wednesday.

Sen. Bernie Sanders (I-VT) — another leading 2020 contender — has not only voiced support for Green New Deal, but plans to introduce legislation supporting it.

Meanwhile, environmental activists are ramping up a pressure campaign designed to drum up Democratic support for the Green New Deal. In December, Hundreds of young demonstrators turned out on Capitol Hill to push Democrats on a package of ambitious environmental goals championed by freshman Rep. and Democrat-socialist Alexandria Ocasio-Cortez (D-NY) an increasingly influential figure on the left.

However, some Democrat leaders believe turning the proposal into law is unrealistic.

Rep. John Yarmuth (D-KY), the new chairman of the House Budget Committee, criticized the plan this weeek as being too ambitious. “The idea of, for instance, making every structure in the United States environmentally feasible is probably something that is totally impossible to do,” the Kentucky Democrat said Friday on Hill.TV’s Rising.

“I mean it would be wonderful if you could do that, but nobody could afford that, so I’m not sure what purpose that would serve,” he added.

In an interview Friday, Ocasio-Cortez proposed that funding for her plan could come from taxing the rich up to 70 percent.

“You look at our tax rates back in the ’60s, and when you have a progressive tax rate system, your tax rate, let’s say from $0 to $75,000 maybe ten percent or 15 percent, etc. But once you get to the tippie-tops, on your ten millionth dollar, sometimes you see tax rates as high as 60 or 70 percent. That doesn’t mean all $10 million are taxed at an extremely high rate. But it means that as you climb up this ladder, you should be contributing more,“ the 29-year-old told 60 Minutes host Anderson Cooper in an interview to air on CBS Sunday.