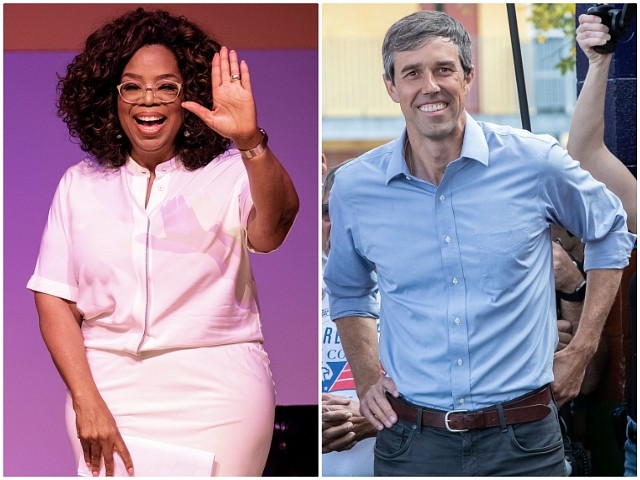 Some of Hollywood’s most powerful female executives revealed this week that their dream 2020 presidential tickets include talk show host legend Oprah Winfrey and Rep. Robert Francis “Beto” O’Rourke (D-TX), among other Democrats, according to a survey conducted by The Hollywood Reporter.

Marvel Studios vice-president of physical and post-production Victoria Alonso said, “A version of Kamala Harris and Beto O’Rourke. Or Beto and Kamala.”

Warner Bros. TV executive vice-president of development Susan Rovner: “Oprah Winfrey and Dolly Parton — I actually have asked them both to run, I even made T-shirts. Unfortunately, I don’t think I convinced either of them.”

O’Rourke rocketed into the 2020 conversation almost overnight after coming within three percentage points of defeating  Sen. Ted Cruz (R-TX). O’Rourke is believed to have discussed a possible White House bid with former President Barack Obama last month, while the progressive lawmaker’s chief of staff is fielding calls from operatives who worked on the former commander-in-chief’s campaigns in Iowa and New Hampshire.

O’Rourke has quickly established a national profile after raising more than $60 million for his failed Senate campaign — much of it from small donations — and coming close to unseating Cruz. He’s increasingly discussed as someone who could attract the same type of attention — and financial resources — as better established Democrats such as former Vice President Joe Biden and Sens. Cory Booker (D-NJ), Elizabeth Warren (D-MA), and Kamala Harris (D-CA).

Last month, O’Rourke said that he prefers to finish his congressional term January 3 before deciding what’s next. However, that’s a far cry from repeatedly saying during the Senate campaign that he had no White House aspirations whatsoever.

Conversely, Oprah Winfrey has definitively ruled out a possible White House bid in 2020, stating during an appearance on Jimmy Kimmel Live last February that she is most certainly not mulling a run.

“Where do I look into the camera? I am definitely not running for president,” the entertainment mogul said, prompting multiple audience members to cry “no!”

“I am the kind of person who tries to listen to signs. I think, well am I supposed to run the country? I don’t think so,” she continued.