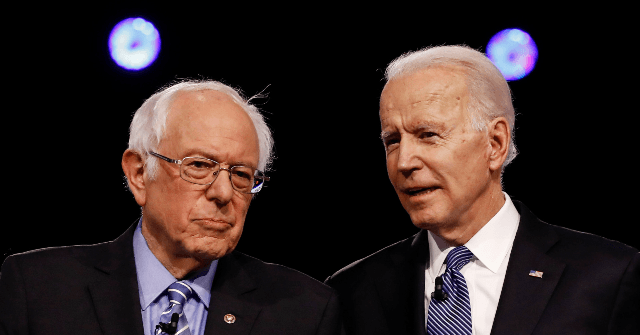 Speaking at the car rally, Sanders wished the president and first lady Melania Trump well, but warned that “no one is safe from this pandemic,” citing the number of lives lost, “including 7,000 right here in Michigan.”

“And it doesn’t matter if you are the president of the United States, or his campaign manager, or his press secretary, or his close advisors. Each and every one of us is vulnerable,” he continued, adding that everyone will remain vulnerable until there is a vaccine.

“That is the reality, and there is no getting away from that,” his prepared remarks read.

Sanders explained that he disagrees with the notion that the nation has to choose between having a strong economy and protecting the American people from the Chinese coronavirus, contending that the U.S. will never have a strong economy as long as the virus rages.

We can keep our country moving forward, Sanders said, if officials embrace a “disciplined” and “responsible” approach, as opposed to an approach that is “dangerous” and “reckless.”

Sanders then asked the crowd which candidate has proven to be responsible, disciplined, and devoted to science. That candidate, he said, is unequivocally, Joe Biden.

He continued by touting his well-known stump speech talking points, pleading that we need an economy that works “for all of us” — not just the wealthy.

“In my view, we can no longer tolerate a rigged system that allows the three wealthiest people in our country to own more wealth than the bottom half of American society,” Sanders continued, calling the “outrageous” level of wealth inequality “grotesque” and “unsustainable.”

The Vermont lawmaker briefly acknowledged that he and Biden “disagree” on a number of issues but said Biden’s economic proposals are “strong” and will “go a long way,” citing the former vice president’s plan to raise the federal minimum wage to $15 per hour and expand the “trade union movement.”

Sanders’ remarks, particularly on the Wuhan virus, stand in stark contrast to the Trump’s, who said earlier in the day that Americans should not live in fear, nor let the virus “dominate” their lives:

I will be leaving the great Walter Reed Medical Center today at 6:30 P.M. Feeling really good! Don’t be afraid of Covid. Don’t let it dominate your life. We have developed, under the Trump Administration, some really great drugs & knowledge. I feel better than I did 20 years ago!