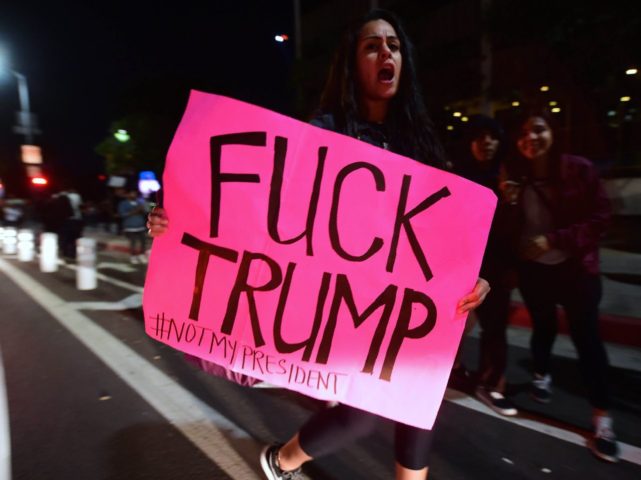 A recently leaked video shows footage of an event at Belmont University, which featured guest speaker Dr. Joseph Morgan playing a song with the lyrics “Fuck Donald Trump.” The University claims it “feels betrayed” by Morgan’s speech and presentation.

The song was played during a speech by Dr. Joseph Morgan of Middle Tennessee State University. The lecture was called “Music and Discourse.” A description for the lecture said that it would discuss “musical resistances to Donald Trump.”

Students in attendance claimed that Morgan used explicit language throughout the speech. “[Joseph Morgan] is literally saying f*ck and p*ssy and vagina and just dissing trump the entire time playing hate songs against Trump,” one student wrote in a text message to a friend.

Some students on social media praised the speaker for criticizing President Trump during his lecture. Others, including Belmont students and alumni, condemned the university for allowing Morgan to use his guest lecture to play songs with expletive-laden criticisms of the president.

In a statement, Belmont University condemned the use of the song during the event. They wrote that they were opposed to the obscene language that was used in the song. They added the song contradicts the university’s commitment to civil discourse.

Earlier today an outside speaker appeared at Belmont University and shared content about politics and popular culture that was biased and disrespectful. Some of the content presented, including the presentation title which was different from what had been approved by University officials, was outside the lines of what was expected. The University feels betrayed by the deception implicit in the actions of the guest speaker. Belmont University does not endorse the message that was delivered and also strongly objects to the obscene language that was used. We apologize to anyone who was offended as today’s event was not reflective of our Christian identity nor of our institutional commitment to civil political discourse.