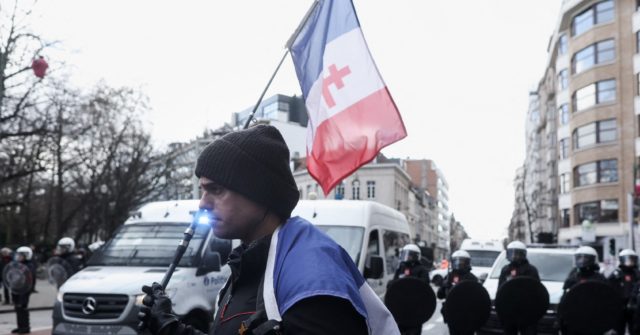 Police in Belgium have blocked vehicles taking part in Freedom Convoy demonstrations from accessing Brussels, the de facto capital of the EU, as authorities across the world implement a crackdown on the movement.

Vehicles looking to take part in the EU’s Freedom Convoy protest have been targeted by Belgian police, with authorities redirecting suspicious traffic to a car park north of Brussels in the hopes of curbing the anti-lockdown demo.

While authorities have permitted a so-called “static demonstration” to occur at the car park near the Brussels Expo building, the ban on any Canada-style anti-lockdown protest in the city proper remains banned by authorities.

According to a Euronews report, over 1,300 vehicles had gathered in Lille — near the Belgian border — for the protest, but police had redirected any suspicious traffic looking to enter the country away from the European capital and towards the designated car park.

Some of those looking to protest lockdown measures were subsequently allowed to enter the city on foot, where a smaller gathering took place, but multimedia organisation Bruzz reports that these demonstrators quickly found themselves surrounded by riot police.

“We are preventing the demonstrators from going further into the centre,” the publication notes a police spokesman as saying on the matter.

“As long as they do not obstruct traffic and do not run amok, we will tolerate the current demonstration for a while,” they also said.

Meanwhile, Strasbourg prefecture in France — another centre point for European power — also implemented a general ban on all “undeclared demonstrations” near the European parliament, with authorities fearing that several “road convoys seem to have formed to reach” the city.

Crackdowns on Freedom Convoy protests in Europe’s heartland are mirrored by the ever-more-stringent measures being used by other powers to quell the anti-lockdown demonstrations in their respective countries.

Authorities in France managed to successfully block the majority of Freedom Convoy participants from entering Paris, meanwhile utilising tear gas on the vehicles that managed to sneak through the police blockade and gather in the city centre.

Police in New Zealand meanwhile had attempted to disperse anti-lockdown protesters from their position outside the country’s parliament by blaring music from the 1980s and 1990s, including the Macarena.

However, the measure seems to have little effect, with those participating in the Freedom Convoy demo merely blaring back their own music in retaliation, including Twister Sister’s We’re Not Gonna Take It.

By far the most extreme crackdown on Freedom Party protests however has been those seen in Canada, with the nation’s far-left Prime Minister, Justin Trudeau, invoking never before used emergency powers to stamp out the protests.

Trudeau has since threatened to freeze the assets of protesters, while his government said that they would target crowdfunding platforms and cryptocurrency transactions that are aiding the demonstrations under newly expanded anti-money laundering and terrorist financing laws.

Despite government crackdowns at home and abroad, many demonstrators on the outskirts of Brussels remain largely positive, with there being reports that the Convoy demonstration may yet ramp up in the EU capital.

According to a report by the Brussels Times, protesters have been learning from their mistakes, with those looking to join the demonstrations in the EU capital being told to enter Belgium in a more discreet manner to avoid detection.

Bruzz also reports that it is mainly Dutch and French vehicles occupying the Brussels Expo car park, with vehicles looking to attend proceedings from Germany notably absent from the holding location.

“Thousands of cars are still arriving from Paris,” one woman also told the publication, with another claiming that those stuck in Lille were still looking to attend events.