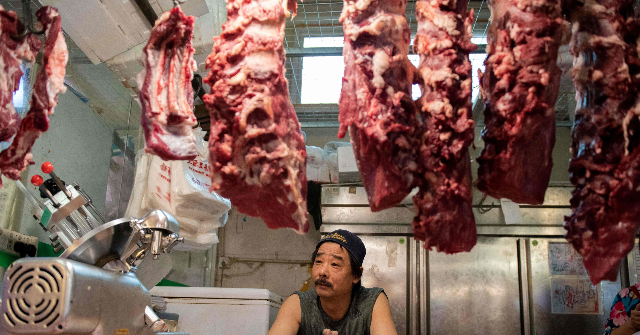 Chinese state media reported Friday that at least three new coronavirus cases have been identified in Beijing, including what the Chinese government claims is “the first domestically transmitted case in eight weeks.”

Although the government insists a new wave or “resurgence” of the virus is unlikely, warnings were issued to Beijing’s 20 million residents, and several markets visited by the patients were shut down.

Authorities reported the first new case on Thursday, followed by two more on Friday, according to the Chinese Communist Party’s Global Times. The patient identified on Thursday, a man named Tang, visited several markets in Beijing’s Fentai district before he was diagnosed. The two patients identified on Friday are “colleagues from a meat research center” in the Fengtai district.

The article added that Beijing officials pledged to “strengthen COVID-19 controls in the resumed catering industry, targeting meat and seafood markets, supermarkets, frozen meat warehouses and restaurants,” even though it also asserted that “public health experts said there was no research suggesting the coronavirus could live or spread on vegetables and meat.”

The rest of the Global Times piece was devoted to congratulating Beijing on handling the coronavirus outbreak so well, with “timely detection” of all infections followed by the swift implementation of “necessary measures.”

Officials warned city residents to keep practicing those measures or else another outbreak could result from “people’s neglect of personal protections.”

China is still battling a substantial coronavirus outbreak in its northeastern region severe enough to require some citywide lockdowns in late May. An “uptick” of cases was reported nationwide on Thursday, but the official count of new infections remains in the low double digits. Chinese officials claim most of these infections are imported from other countries, with rare exceptions like the Tang case in Beijing. The Chinese government has a long history of providing false information about the coronavirus and concealing the true number of patients and fatalities.