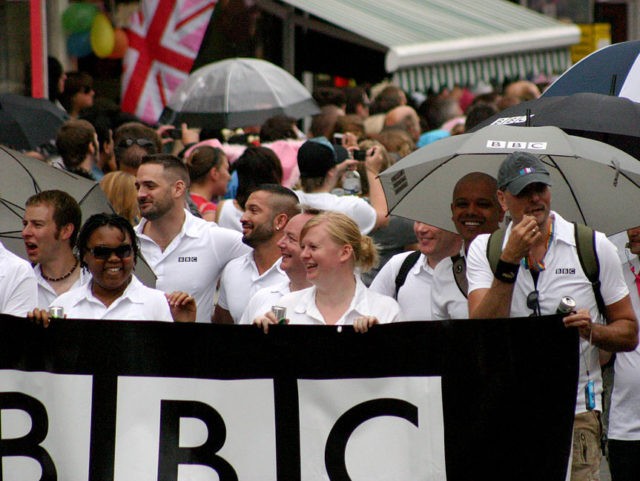 The BBC is to fight a “heteronormative culture” with a raft of pro-LGBT reforms, despite figures showing sexual minorities are already overrepresented as much as fivefold in the broadcaster’s workforce.

Staff will be told to use gender-neutral pronouns for workers who say they are “non-binary” — identifying as neither male or female — under new BBC policies, which also detail plans to put additional support in place for transgender individuals, especially while they are “transitioning”.

Workforce training on diversity, inclusion, and “unconscious bias” will also be expanded to include LGBT issues, while non-heterosexual mentors will guide less senior staff who identify as a sexual minority.

Teams working in television, news and radio broadcasting have been told to increase representation of sexual minorities, specifically that they insert more “incidental” portrayals of LGBT relationships and individuals not directly related to a storyline or news item.

In addition, the BBC said it will raise the profile of employees who are not heterosexual and urge them to “bring their whole self to work”.

‘Straight Ally’ badges will be handed out to heterosexual members of staff.

The reforms were brought in following an internal survey of 300 LGBT members of staff, who called for “improvement” in a number of areas including the demand that the BBC adopt the umbrella term LGBTQ+ for sexual minorities so as to be “inclusive” towards people who claim to belong to identities other than Lesbian, Gay, Bisexual, and Transgender, including ‘Queer’.

James Purnell, director of radio and education, said: “One of our big challenges currently is around young audiences.

“In a recent YouGov survey only 51 percent of 18 to 24-year-olds said they identified as completely heterosexual.

“An organisation that appears to have a heteronormative culture is not one that is going to cut ice with them either as a consumer or an employee.”

As Breitbart London reported last year, official government figures showing that just 4.1 per cent of 16 to 24-year-olds reported themselves to be lesbian, gay, or bisexual (LGB) was published just a week after an Ipsos Mori poll for the BBC showed only 66 per cent of young people said they were heterosexual.

Announcing in July the results of a confidential staff survey revealing that sexual minorities were overrepresented by about five times at the corporation the BBC praised the “very, very high” proportion of LGBT workers but insisted there was more to be done, suggesting a drive to hire lesbians.

According to the figures, more than 400 transgender individuals are employed at the BBC, while 11 per cent of its total workforce and 12 per cent of senior staff identified as sexual minorities.

The broadcaster’s seeking of an ever-more “diverse” workforce in terms of employing increasing numbers of staff from ethnic and sexual minorities is driven by the BBC’s “commit[ment] to reflecting and representing the diversity of the UK”, it claims.

It is unclear then why the significant underrepresentation of heterosexuals has at no point been raised as an issue of representation in the way lesbian staff numbers were.