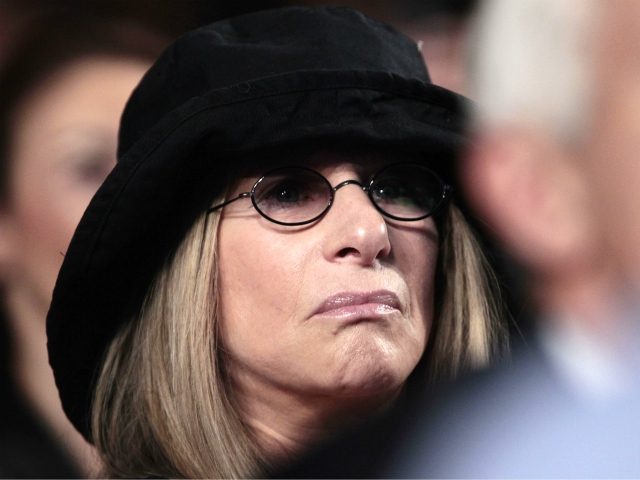 In a series of interviews to promote her new album Walls, actress and singer Barbra Streisand details what inspired her to write “Don’t Lie to Me” — an anti-Donald Trump ballad in which she accuses the president of being incapable of telling the truth.

When Barbra Streisand started writing lyrics for her new political anthem, “Don’t Lie to Me,” she initially aimed for “very subtle” references to President Donald Trump — but claims she couldn’t help herself from going “ballistic.”

“I just went ballistic,” said the 76-year-old of the president, who she refers to as “The Liar in Chief” and the “Groper in Chief.”

“Don’t Lie to Me,” released Thursday, finds an emotional Streisand questioning the nation’s leader and pleading for change.

“I just can’t stand what’s going on,” the Oscar, Grammy, and Emmy-winner told The Associated Press in a phone interview Wednesday night. “His assault on our democracy, our institutions, our founders — I think we’re in a fight. … We’re in a war for the soul of America.”

“Don’t Lie to Me” appears on her new album, Walls, her first project of mainly original tracks since 2005. It will be released Nov. 2.

Streisand, a proud and outspoken Democrat who has campaigned for politicians over the years, said she felt moved to write original music because of what’s happening in the world. Of “The Rain Will Fall” — another new song she co-wrote — she says, “You can spell rain several ways.”

“But it’s my prophecy,” she said, laughing. “I hope it comes true.”

“Don’t Lie to Me” came to life during a road trip. Streisand said listening to the news in the car “was making me sick, listening to lies, listening to things that are such craziness.” So she turned on music and felt motivated to write a new song.

“I wanted to talk about the things that were making me feel so sad, heartbroken,” she said. “I’m a kind of fierce American. I don’t know who we are anymore as a country. Are we embracing people who flee oppression? Or are we separating children from parents, putting them in cages? I don’t know if people care about the planet, the survival of the planet. Do they care about clean air? Clean water? Clean food? If they do, how could they vote for somebody like Trump, who believes it’s a hoax?”

In an interview with TIME magazine, the singer said she’s worried America has entered “very troubling times” with a president who “doesn’t seem to care much about truth.”

“[H]e’s chipping away at the pillars of democracy, like freedom of speech, freedom of religion, freedom of the press. I believe in the power of the truth, and I can’t stand being lied to. I don’t think the country should be lied to either,” Streisand said. “So that started me thinking about how to put down my thoughts in music and lyrics about what was on my mind. As a matter of fact, the first song from this album is called “What’s On My Mind.” And I was very driven by this president’s lies. And that’s why this first song is “Don’t Lie to Me.”

Streisand said that while she first thought a Trump presidency would cause her to gain only a few pounds, the singer says the Commander-in-Chief has caused her to experience “crippling” stress.

“[H]e upsets my stomach, he upsets my mind, he upsets my whole physiology,” adding, “But when you hear this warped view of reality, it’s all the more frustrating. And who’s going to speak up?”

Asked if she is hopeful the Democrats will take back Congress in November, Streisand said she’s cautiously optimistic about the party’s prospects, but pointed to the outcome of the 2016 presidential election as of example of how unpredictable politics can be.

“[W]e thought Hillary Clinton was going to win and then she didn’t. And we weren’t sure about the hacking at that moment, but I’m sure that affected her not being made the president,” she told the magazine.

On her 11-track Walls album, she also reworked classics like “Imagine,” ”What a Wonderful World” and “What the World Needs Now.”

“It’s easy to feel powerless now but we’re not if each of us speak up and get out and vote,” she added.