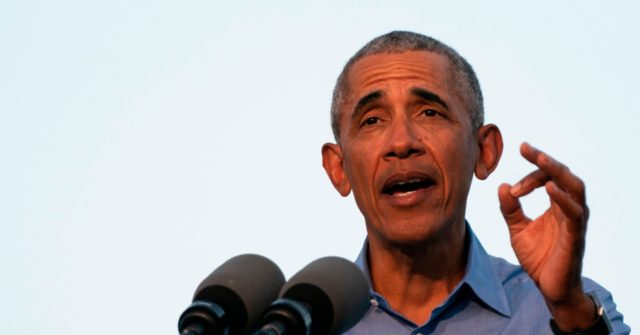 “We’ve seen folks of every age and background who’ve packed city centers and airports in town squares, just so families wouldn’t be separated, so another classroom wouldn’t get shot up, so our kids wouldn’t grow up on an uninhabitable planet,” Obama said at a campaign rally for Biden in Philadelphia, Pennsylvania.

Obama has a history of alarmist rhetoric about global warming, but this might be his most drastic assessment of the planet yet.

In April, Obama warned that climate change was a bigger threat to the world’s children than the coronavirus pandemic.

“We’ve all had to adapt to cope with a pandemic,” Obama wrote on Twitter. “Climate change will force far harsher changes on our kids.”

At a March 2019 speech in Canada, Obama warned that climate change would cause dramatic shifts in human behavior.

“At the current pace that we are on, the scale of tragedy that will consume humanity is something we have not seen in perhaps recorded history if we don’t do something about it,” he said.

In September 2019, Obama said climate change would “define the future for today’s young generation more dramatically than any other.”

In 2017, Obama warned that growth in meat production would only lead to spikes in methane emissions, threatening the planet.

“As people want to increase meat consumption, that, in turn, is spiking the growth of greenhouse emissions coming out of the agricultural sector,” Obama said, pointing to countries growing economically, allowing their citizens to afford and consume more meat.

The world’s climate was threatened, Obama said if people were not taught to reduce meat consumption and “have a smaller steak.”