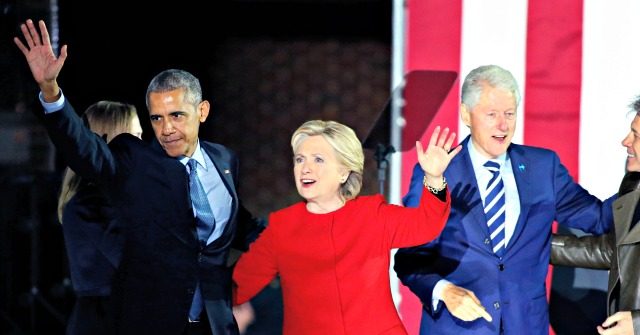 With 13 days to go, his debut will be in the same city in which the Obamas joined Bill and Hillary Clinton during their final campaign stop before the 2016 election.

It comes as Biden took to social media on Tuesday afternoon and tweeted his confidence in victory from his basement:

Due to restrictions imposed by the coronavirus pandemic, Obama will speak to a small, select crowd at a drive-in rally, where supporters will hear his message over the radio.

At this stage it is not known if Michelle Obama will be at his side.

Michelle Obama says she is “dealing with some form of low-grade depression” due to the Trump Administration. https://t.co/aQw2GGixmo

Donald Trump said then it was “good news” Obama would campaign for his former vice president as it would focus minds on just what is at stake in 2020.

“Well, that’s good news,” Trump said. “He campaigned harder than Hillary Clinton did for Hillary, and it just made us stronger.”

Trump reminded the audience Obama failed to endorse Biden during the primary and even waited several weeks after Biden won the nomination before officially getting behind him.

Trump’s message reinforced one he has made many times before about the “horror” of the Obama/Biden term in the White House.

Democrats are pushing into the key battleground state Pennsylvania and its 20 electoral college votes in 2020, a state Hillary Clinton lost by 68,000 votes to President Donald Trump in 2016, as Breitbart News reported.

The concentration of fire power focused on Pennsylvania by Democrats suggests the leadership of the Biden campaign, haunted by the bitter memory of a 6.9 point net swing towards Donald Trump in the last two weeks of the 2016 campaign, believes the Keystone State is still very much in play.