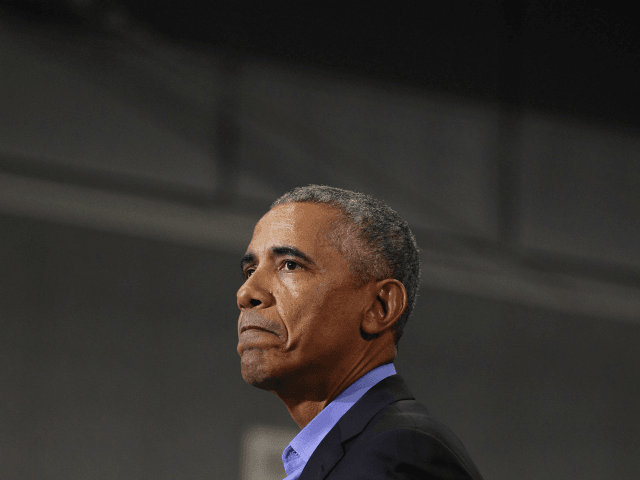 Former President Barack Obama griped about the media and Fox News on Friday, returning to old complaints he expressed as president.

He appeared frustrated that President Donald Trump continued to raise fears about the migrant caravan forcing their way to the southern border and that the media followed suit by reporting it.

At a campaign rally in Detroit, Obama accused Fox News of having a business interest in amplifying fears throughout the country.

“That’s what they do,” he said. “But even the outlets that aren’t in the can, you know, they kind of get distracted too.”

“I guess they can’t help themselves, so they just cover it,” he said in Milwaukee, Wisconsin.

The former president accused Republicans of raising fears in every election, complaining about Sarah Palin’s condemnation of “death panels,” fears about Ebola, and his former Secretary of State Hillary Clinton’s e-mails.

Obama said Republicans were not stretching the truth ahead of the midterm elections, but rather “blatantly, repeatedly, baldly, shamelessly, lying.”

“Part of the problem, frankly, is, is that a big portion of the media, right now, are used to it, and a part of them just repeat the lies over and over again,” he said. “I mean I promise you, Fox News will not tell you that – what the Republicans are saying about pre-existing conditions aren’t true.”

Obama ridiculed the notion that Americans should worry about the caravan of thousands of migrants threatening to flood the southern border.

“Everybody gets all freaked out, and we got to stop falling for this stuff,” he said in Milwaukee. “We’re like Charlie Brown with football. You can’t fall for that okie doke. Don’t be hoodwinked; don’t be bamboozled.”

Obama said that “a bunch of impoverished, malnourished refugees 1,000 miles away” did not pose a threat to the country.

“Don’t fall for that kind of fear-mongering, because while they are distracting you with all this stuff, they’re robbing you blind,” he said.