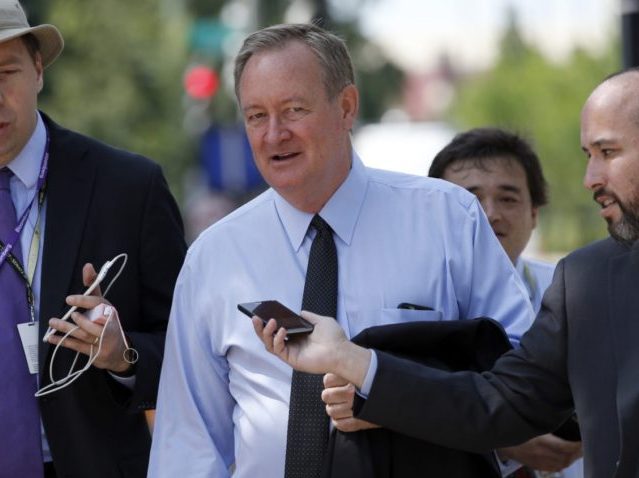 Senate Republicans are once again attempting to reform housing finance and the government-sponsored mortgage giants Fannie Mae and Freddie Mac.

Republican Senator Mike Crapo, the chairman of the Senate Banking Committee, released the outline of a reform plan Friday that proposed breaking-up and privatizing Fannie and Freddie. The two mortgage guarantors have been under government control since they were seized during the financial crisis in 2008.

The proposal might deliver a windfall to the hedge funds and other investors who have been pressing Capitol Hill and the White House to release the companies from conservatorship. But because the outline is vague on many points, that is far from clear. Shares of Fannie and Freddie initially rose more than 5 percent after Crapo released his proposal but then retreated to about half that gain.

The proposal envisions Fannie and Freddie as private guarantors but suggests that they would compete against other guarantors. The market shares of each guarantor would be capped at a percentage Crapo’s outline did not specify. Currently,  Fannie and Freddie back more than half of the country’s mortgages. Crapo’s proposal appears to require that to shrink over a period of years, allowing for more competition. While lawmakers are concerned about disrupting the mortgage market by displacing Fannie and Freddie, they are also wary of any plan that would preserve their “Too Big to Fail” status.

“We must expeditiously fix our flawed housing finance system,” Crapo said in a statement. “My priorities are to establish stronger levels of taxpayer protection, preserve the 30-year fixed rate mortgage, increase competition among mortgage guarantors, and promote access to affordable housing.”

The proposal would impose a leverage requirement on Fannie, Freddie, and other mortgage guarantors, a much stricter restriction on their capitalization than existed before the financial crisis. It would also require both companies to sell-off their multi-family businesses.

The Federal Housing Finance Agency, which regulates Fannie and Freddie and has served as their conservator for a decade, would be reformed. Its single-director structure, which has faced constitutional challenges in court, would be changed to a bipartisan board similar to the Securities and Exchange Commission.  Many of the rules imposed and powers exercised during the conservatorship, including the right to require guarantors to transfer risk to secondary markets, would be codified into law.

In addition, the prices of the guarantees offered by Fannie and Freddie–and their theoretical competitors–would have to be approved by the FHFA.

Many of the details are not worked out in Crapo’s plan. It’s not clear, for example, what the leverage limits or market share caps would be. Nor is it clear to what would happen to the U.S. Treasury’s large equity stake in Fannie and Freddie.

The proposal from Crapo comes after weeks of speculation that the Trump administration might act unilaterally to reform Fannie and Freddie. This week, however, a spokeswoman for the White Hosue shot down that idea, saying the administration would work with Congress rather than act on its own.

There have been a number of attempts to reform Fannie, Freddie, and housing finance over the last decade, none of which have mustered enough support to become law. The most recent attempt was a 2017-2018 effort by then-Senator Bob Corker and  Senator Mark Warner that would have preserved Fannie and Freddie instead of eliminating them, as earlier legislation had proposed. Those efforts, like those undertaken in 2013 and 2014, never gained steam and quickly fizzled.

Some on Capitol Hill are hopeful Crapo’s latest effort could bear fruit because of the threat that Treasury Secretary Steven Mnuchin and acting FHFA head Joseph Otting might move on their own to implement reforms.

“The legislature may have to act to prevent Mnuchin’s Wall Street gang from doing something reckless to enrich their hedge fund buddies,” one veteran of past reform attempts said.

Crapo’s proposal has initially won praise from some veterans of past reform efforts.

“This is a needed step in the right direction and the Chairman should be applauded for his initiative here today,” said David Stevens, the former commissioner of the Federal Housing Administration and former president and CEO of the Mortgage Bankers Association.